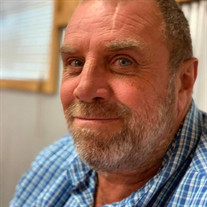 ** It is suggested, but not required, that anyone attending the visitation or service, please wear a mask or facial covering. Thank you! ** Mr. Wiggins passed away Saturday afternoon, October 9, 2021, at Jackson-Madison County General Hospital. A native and life-long resident of the Bolivar community, Gary was the son of Edwin and Dottie Hatch Wiggins of Bolivar, both of whom survive. A dedicate firefighter, he was the assistant fire chief for Toone Fire Department where he began his career. He served Hornsby as fire chief from 2009-2020 and also had been their assistant chief. Always striving to better himself, he received many hours of education in firefighting from Jackson State Community College. Gary worked 20 years as a truck driver for Vandiver Sawmill and, the last 15 years, as foreman for the Hardeman County Highway Department. He enjoyed attending Forest Hill Pentecostal church and, in his leisure time, liked lawnmower pulls, farming, anything having to do with tractors, going to the river and listening to music. Among his favorites were Bob Seger, Overdrive II with Johnny Weems and Sparky Sparks, and Small Shack. Most of all, he loved being a family man who spent time with his son and grandchildren. He will be greatly missed by his beloved dog, "Oakley Marie". Gary is survived by his wife, Barbara, of Bolivar, whom he married on November 9, 1984; his son, Gary Wiggins, II of Selmer; his parents; his sister, Dana Rhea Knight (Matt) of Bolivar; two grandchildren, Matthew and Luke Wiggins of Selmer; and three nephews, Wesley Jackson, John Tillmon and Casey Tillmon, all of Bolivar. He was preceded in death by an infant daughter, Natalie Wiggins, in 1990. Memorials may be sent to the Toone Fire Department, c/o City Hall, Toone, TN 38381.

** It is suggested, but not required, that anyone attending the visitation or service, please wear a mask or facial covering. Thank you! ** Mr. Wiggins passed away Saturday afternoon, October 9, 2021, at Jackson-Madison County General Hospital. A... View Obituary & Service Information

The family of Gary Edwin Wiggins created this Life Tributes page to make it easy to share your memories.

** It is suggested, but not required, that anyone attending the...

Send flowers to the Wiggins family.