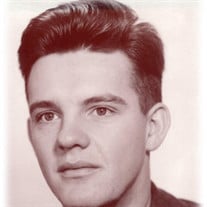 Mr. Gene R. Helton was born April 10, 1931 in Waynesboro, TN to the late Frank and Lorene Caton Helton. He grew up working at the family drug store, Helton's Drugs, along with the bus station, the soda fountain and driving a taxi. He graduated from Wayne County High School in 1949 and then attended Peabody College in Nashville where he was majoring in Business Administration. While attending college, he was drafted into the United States Army in July of 1952, during the Korean War. He served his country in Stuttsgard, Germany where he was attached to the Counter Intelligence Group as a Photographer Laboratory Specialist. Mr. Helton completed basic training at Ft. Jackson, SC. later transferring to Camp Girdon, GA for a special school of instruction with CIG for combat photography. The Army provided him an opportunity to travel extensively in Europe. Corporal Helton was honorably discharged in May 1954. After discharge he was employed by Eastern Airlines in Nashville where he retired after 31 years of service. After retirement he returned to his hometown of Waynesboro, where he spent his retirement years keeping the yards immaculate and passing out gold coins to all of the children in Wayne County. Mr. Helton departed from this life on July 15, 2020 at his home making his stay in this life 89 years 3 months and 5 days. He is survived by a sister, Linda Helton Tripp of Nashville, TN; two nephews, Eddie Tripp of Nashville, TN and Jim Helton of Muncie, IL; two nieces Janet Tripp Chapman and husband Tim of Foley, AL and Lily Stafford and husband Paul of Natick, MA. He is also survived by many loving friends In addition to his parents, he is preceded in death by a brother James Caton Helton and his grandparents, Henry Allen and Emily Helton and Arthur B. and Ethel Caton. Graveside Memorial Services will be on Saturday July 25, 2020, 5:00 PM at Shields Cemetery in Waynesboro with Coy Anderson officiating. Shackelford Funeral Directors Assisting.

Mr. Gene R. Helton was born April 10, 1931 in Waynesboro, TN to the late Frank and Lorene Caton Helton. He grew up working at the family drug store, Helton's Drugs, along with the bus station, the soda fountain and driving a taxi. He graduated... View Obituary & Service Information

The family of Gene Helton created this Life Tributes page to make it easy to share your memories.

Send flowers to the Helton family.