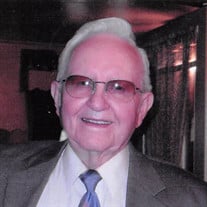 George Wendell Hooper was born November 11, 1928, in Silerton, and passed away peacefully at the age of 92 on February 4, 2021 in his home surrounded by family. He was the son of the late William Columbus and Anna Mai Rush Hooper. He served in the United States Army in the 101st Airborne Division from 1948-1952 primarily in the capacity of military police. Most of his time in the service was spent deployed in Occupied Germany and Vienna, Austria. He was always very proud of the time he spent serving his country. On July 26, 1954, he married the love of his life, Betty Jean Mosier, at the courthouse in Corinth, MS and they moved to Memphis, TN where they would raise their family. George and Betty had a love for music which lead them to forming the band "George and Betty & The Country Playboys" in the 1960's. They played at various venues in the Memphis area and even had their own radio show. He prided himself on being a hard worker and retired in 1987 after 30 years at the United States Postal Service. Mr. Hooper enjoyed spending time with his family, reading, golfing, bowling and never turned down anyone at a game of chess or dominos, and usually won at both. He loved sports and was a lifelong St. Louis Cardinals baseball fan. He is survived by his wife of 66 years, Betty Mosier Hooper; two daughters, Jeanne Kennedy and husband Mark of Selmer; Wendy Morris and husband Joseph of Duluth, MN; six grandchildren, Matthew Kennedy and wife Jessica of Selmer, Josh Kennedy of Jackson, Luke Kennedy of Selmer, Mariah Morris, Elliot Morris and Alexis Morris, all of Duluth, MN; and two great grandchildren, Cooper and Claire Kennedy of Selmer. In addition to his parents, Mr. Hooper was preceded in death by 2 infant sons, William and Roger Keith Hooper; and two siblings, a sister, Willie Juanita Hurst and a brother, Kenneth Edwin "Buster" Hooper. Memorial contributions in his name may be sent to St. Jude Children's Research Hospital (www.stjude.org/donate). THE FAMILY REQUESTS THAT ANYONE ATTENDING THE VISITATION OR SERVICE FOR MR. HOOPER WEAR A MASK OR FACIAL COVERING. While visiting or attending services for Mr. Hooper, please consider the following guidelines: * Maintain 6 feet between yourself and the next closest person; * Refrain from hugs and handshakes; * When you sneeze or cough, use your elbow to cover your nose and mouth; * Wash your hands often; * Avoid touching your face; and * Minimize time spent in places where people gather.

George Wendell Hooper was born November 11, 1928, in Silerton, and passed away peacefully at the age of 92 on February 4, 2021 in his home surrounded by family. He was the son of the late William Columbus and Anna Mai Rush Hooper. He served... View Obituary & Service Information

The family of George Wendell Hooper created this Life Tributes page to make it easy to share your memories.

Send flowers to the Hooper family.