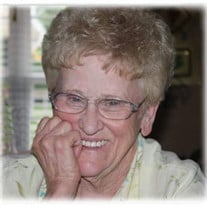 Golden Haddock Thompson Stults of Collinwood, TN was born February 23, 1930 in Wayne County, TN, the daughter of the late Rye and Roxie Lowery Haddock. On June 30, 2021, Golden Stults passed away at the age of 91 at her home. She was a beloved... View Obituary & Service Information

The family of Golden Haddock Thompson Stults, Collinwood, TN created this Life Tributes page to make it easy to share your memories.

Send flowers to the Stults family.