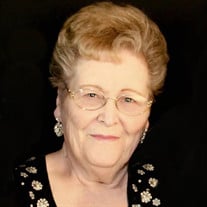 Gwen McCullar was born March 31, 1930 to Houston and Mozell Tull Rowland in their house in Henderson, TN. She grew up in a farming household where her dad, mom, brother and she worked together in the fields. She talked fondly of the memories of those good ole days. She told with much joy how she and her mom would leave the field and go to the house to cook lunch. Then, how she would rest lying on the porch with her dad listening to the Cardinals baseball game on the radio. She would say, "many mornings I would wake up with snow on my bed" and with a sweet smile add, "we didn't have much but we had a good life and a lot of love." She married Robert McCullar on October 11, 1947 after 3 weeks of courting. Together they lived a life of struggles, travels and trials as they served their Lord sharing the Gospel. Gwen was not always in agreement with Robert's propositions and their objectives were many times oppositional. However, she put her feelings aside, usually after voicing those feelings, and faithfully served alongside her man as they ministered to many souls in many places. Those who knew Gwen were very fortunate and blessed and informed. Just to sit and talk with her brought much laughter and joy to their souls. You always knew her thoughts and opinions, even if you didn't ask...and if you asked you sure got an earful! Dear Mrs. Gwen had her byword and would quickly tell you that it was not cussing. You never had to wonder what she was feeling or thinking, nor did you have to question in whom she placed her faith and hope. During her whole life she trusted in the good Lord and would testify that He always provided and never failed. Gwen worked in production and assembly for General Electric in Selmer for 17 years, retiring in 1990. Doing word search puzzles, watching "Family Feud" on the Game Show Network and the Channel Ten Gospel Hour, and listening to music on "Alexia" were some of her favorite pastimes. During her last days she continued to steadfastly trust in her Lord and Savior. She loved her family dearly but her heart and soul longed to be in Heaven with her Savior and her family just inside the pearly gates. On October 11, 2020, her seventy-third wedding anniversary, with her daughter and 2 granddaughters at her bedside...Gwen heard her Lord say "well done thy good and faithful servant, welcome home" and her faith ended in sight! She is survived by a son, Stanley McCullar of Selmer, TN; a daughter, Karla Tranum and husband Timmy of Selmer, TN; seven grandchildren: April Cleary and husband Michael of Michie, TN, Sophie McCullar of Selmer, TN, Houston McCullar of Selmer, TN, Tyler Tranum and fiancee Catie Rodgers Wiggington of Michie, TN, Trevor Tranum and wife Lindsey of Selmer, TN, Kaylee Tranum of Selmer, TN, and Tanner Tranum of Corinth, MS; five great-grandchildren: Kennedy Cleary of Michie, TN, Carter Cleary of Michie, TN, Andi-Kate Tranum of Selmer, TN, Atleigh Tranum Westbrooks of Selmer, TN, and Jax Wiggington of Michie, TN; a God-send granddaughter, Erika McCoy and family of Orange Beach, AL; two nieces, Carroll Smith of Selmer, TN and Carmen Rowland Hoggard of Poplar Bluff, MO; a great-nephew, Van McMahan of Ramer, TN; and many extended family and friends. In addition to her husband and parents, Gwen was preceded in death by a grandson, Joey Singleton on March 6, 1992; a brother, Russell Rowland; and a nephew, Eric Rowland.

Gwen McCullar was born March 31, 1930 to Houston and Mozell Tull Rowland in their house in Henderson, TN. She grew up in a farming household where her dad, mom, brother and she worked together in the fields. She talked fondly of the memories... View Obituary & Service Information

The family of Gwen McCullar of Selmer, TN created this Life Tributes page to make it easy to share your memories.

Send flowers to the McCullar family.