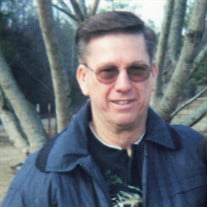 Harlan Wilson (Sonny) Lane, II was born on June 9, 1939 in Crisfield, MD, the son of the late Harlan Wilson and Margaret Shockley Lane. He is survived by his wife Virginia Lewis Lane. He departed this life on August 17, 2021 in Corinth Mississippi... View Obituary & Service Information

The family of Harlan Wilson (Sonny) Lane, II created this Life Tributes page to make it easy to share your memories.

Send flowers to the Lane family.