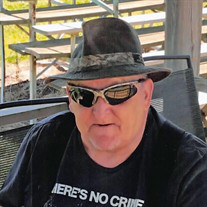 Harold Wayne Johnson, 80, of Milledgeville, departed this life Saturday, May 8, 2021 at St. Frances Hospital in Bartlett. The husband of Shirley Lee Wilbanks, whom he married on August 31, 1973 in Horn Lake, MS, he worked as an offset printer and was part owner of K & J Printing in Somerville. He retired in 2005 from Copywright Graphics. He was born Monday, July 8, 1940, in McNairy County, son of the late Aaron Zee Johnson and Ira Meeks Johnson. He was well known as a faith-based man of God, having a 'God filled faith', and enjoyed watching John Wayne movies, mowing, especially on his John Deere mower, making others laugh and being around his grandchildren. He dearly loved his family and his wife, whom he considered his 'entire world', and could often be found in his 'prayer closet' which was his shed. He had the reputation for giving the shirt off his back for anyone who needed it and was a member of Hope Apostolic Church in Bartlett. Services are 12 PM Noon Friday at Hope Apostolic Church in Memphis with Bro. Michael England, Bro. Luis Bonilla and Bro. Ronnie Hayse officiating. Interment and graveside services are 4 pm Friday at Milledgeville Cemetery. In addition to his wife, survivors include five daughters, Celinda Ann Keech (Doug) of Paris, TN, Donna Lee Loyacano (Joe) of Oakland, Sherry Maxine Sittig (Paul) of Sulphur, LA, Robin Melissa Gordon of Oakland and Lacy Marie Johnson of Memphis; three sons, Bennie Wayne Johnson of Oakland, Jerry Dewayne Johnson (Sue) of Andersonville, TN and David Harold Johnson (Carrie) of Paris; three brothers, Donnie Johnson of Milledgeville, Robert Johnson of Berea, KY and Doyle Johnson of Southaven; two sisters, Nancy Adams of Oakland and Linda Chambers of Oakland; 22 grandchildren and 20 great grandchildren. In addition to his parents, he was preceded in death by a sister, Glenda Sue Anderson; three brothers, Billie Joe Johnson, James Alton Johnson and Bobbie D. Johnson; and a grandson, Alan Wayne Loyacano. Memorial contributions in his name may be sent to Hope Apostolic Church, 5645 Spring Lake Dr., Memphis, TN 38135 or St. Jude Children's Research Hospital (www.stjude.org/donate).

Harold Wayne Johnson, 80, of Milledgeville, departed this life Saturday, May 8, 2021 at St. Frances Hospital in Bartlett. The husband of Shirley Lee Wilbanks, whom he married on August 31, 1973 in Horn Lake, MS, he worked as an offset printer... View Obituary & Service Information

The family of Harold Wayne Johnson created this Life Tributes page to make it easy to share your memories.