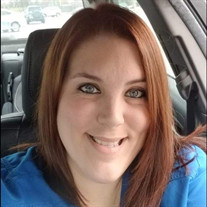 HEATHER MULLINS Henderson, TN: Heather Nicole Mullins age 34 passed away January 19, 2021 at Jackson Madison County General Hospital. She was born July 12, 1986 in Jackson, TN, to Stephen Dean Ivy and Brenda Lea Evans Lawrence. She was raised in Jackson by her parents John and Brenda Lawrence and was a 2004 graduate of Southside High School. She married Will Mullins on March 9, 2011. They made their home in Henderson. She attended Tennessee College of Applied Technology earning her LPN Certificate in 2014. She worked at Henderson Health & Rehabilitation, Forest Cove Nursing Home and had been working for Medical Center Home Health for the past four years. She loved her work and loved her patients. She was a wonderful wife and mother who enjoyed target shooting, riding the back roads listening to music (she especially liked Martina McBride, Lee Ann Womack and Jo Dee Messina) and spending time with family and friends. She loved butterflies and angels and loved chicken strips and fries over any other food. Heather is survived by her husband, James “Will” Mullins, II; a son, Liam Wallace Mullins and a daughter, Justice Elise Mullins all of Henderson; her parents, John and Brenda Lawrence of Jackson, her birth father, Stephen Dean Ivy and stepmother Patty Ivy of Enville; a brother, Jordan Taylor Lawrence of Jackson; a sister, Holly Lea Ivy of Jackson and two half-sisters, Sammie Jo Ivy and Dixie Ivy both of Enville; maternal grandparents Terry and Doris Lovell of Jackson; mother-in-law, Susan Marie Mullins and father-in-law, James W. Mullins of South Jackson; brother-in-law, Ethan Kyle Mullins and sister-in-law, Sarah Noel Mullins of Pinson; nephew, Kade Austin Mullins; as well as many other family members, friends and coworkers.

The family of Heather Mullins - Henderson created this Life Tributes page to make it easy to share your memories.

Send flowers to the Mullins family.