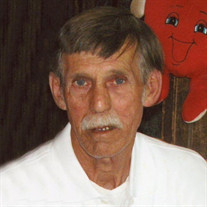 Hershal Hardin departed this life on Monday, July 13, 2020, at the age of 83 years, 6 months, 23 days. He was born in Crittenden County, Arkansas on December 20, 1936, the son of the late Fitzugh D. and Alta D. Brown Hardin. On June 10, 1966, he was united in marriage to Ruth Ann Ables, who preceded him in death on May 6, 2007. Hershal grew up in Arkansas and moved to Savannah, Tennessee in 1973, where he bought his home and raised his family. He loved being outdoors, flower gardening, fishing, and hunting. He retired from Clayton Homes. Hershal is survived by his children, Tammy Hardin, Michael Hardin, Johnny Hardin, all of Savannah, Tennessee, and Frank Hardin of Kentucky; eight grandchildren; six great grandchildren; and a sister, Hazel Marie Gill of Arkansas. In addition to his parents, Hershal was preceded in death by a son, Jerry T. Ables; brothers, Aaron, Aubery, and Jeff; and sisters, Gladis, Mary, and Jane.

The family of Hershal Hardin created this Life Tributes page to make it easy to share your memories.

Send flowers to the Hardin family.