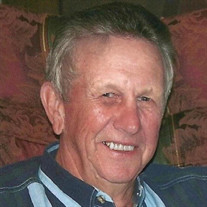 Hershel Hollin was 82 years old, 6 months and 27 days. He was the son of the late Barney Lee Hollin, Sr. and the late Nannie Bernice Spencer Hollin. He grew up in the Milledgeville area and was a standout athlete in basketball and baseball. He was on the Morris Chapel All-District team that went all the way to play at Vanderbilt University. In 1960 he married the love of his life, Doris Bartholomew Hollin who survives. They were married for 61 years, 8 months and 18 days. Even in his last days, he never wanted her to leave his side. Together they had one child, Mitzi Leann Azevedo, and if you knew Hershel, you knew that he absolutely lived for that girl and she did him. I don’t think there was a bigger Daddy’s girl in the world and he ate that up! She always called him her Superman and she believed it with all her heart. There were two things that made Hershel the happiest and that was his wife and his daughter, but Mitzi used to joke that Connie, his special niece, was the favorite! That was an inside joke that made everybody laugh. Hershel was a jack of all trades and if there was anything that he wasn’t good at, I don’t think anyone ever found it. As a young man he drove a backhoe, ran a grocery store, helped build houses, learned to plumb, wire houses, build and rebuild motors, weld, and he was a heck of a shortstop! However he spent the majority of his working life at Grinnell, later known as Anvil, Inc, in Henderson, TN. He was one of the first few hired at Grinnell after the plant opened and he stayed there for 33 years until he retired as a General Forman. Being retired never slowed him down. He became the neighborhood “fix-it” man, a member of the Milledgeville Volunteer Fire Department, a member of the City Council, a grandfather who went to every game possible for Brian and Kristen and even "his boy” Dylan Lott. He NEVER stopped. Hershel's mother, Mama B, often quoted a child-like Mitzi when Mitzi would say and TRULY BELIEVED, "My Daddy can fix anything!" It didn't matter what it was, he could fix it. A broken toy, a broken lamp, a broken refrigerator, even a broken heart. My Daddy could fix anything. He leaves behind his daughter, Mitzi Azevedo of Adamsville,TN, and a special niece who he considered a daughter, Connie Hanna Weatherford (David) of Milledgeville, TN. He also leaves grandchildren Brian Azevedo (Tera) of Milledgeville, Kristen Azevedo Martin (Trent) of Dyersburg, TN, Courtney Myracle (Scott) of Morris Chapel, TN, and Eric Weatherford (Shelby) of Adamsville, TN, and four great-grandchildren Hershel Reed Azevedo, Brooks Wayne Martin, Olivia Reese Azevedo and Hollin Katherine Martin. He is also survived by a brother Teddy Hollin (Ann) of Milledgeville, TN, and a sister, Jimmie Nell Martin, of Hickory Hills, IL, and brother-in-law, James (Dub) Bartholomew of Sardis, TN. He also leaves a special nephew, Barry Bartholmew, of Decaturville, TN, who was his partner in crime in more games of "High Nine" than could be counted and was just a best buddy. He leaves a nephew, Charles Hollin, of North Little Rock, AR, who was born only hours after him on November 16 who was as close to him as a brother. Other than his parents, he was proceeded by a sister-in-law Brenda Bartholomew Hanna, brothers Barney Lee Hollin, Jr, Ellis Hollin, Thomas Sidney Hollin, Johnny Ray Hollin, Willie Dee “Porter” Hollin, Edwin Jones Hollin, Loner Eugene Hollin, and James Bell Hollin who died in infancy. He was also preceded in death by a special nephew, Clint Kennedy, and his mother, Glenda Bartholomew Kennedy and his mother-in-law, Ruby Lee Bartholomew.

Hershel Hollin was 82 years old, 6 months and 27 days. He was the son of the late Barney Lee Hollin, Sr. and the late Nannie Bernice Spencer Hollin. He grew up in the Milledgeville area and was a standout athlete in basketball and baseball.... View Obituary & Service Information

The family of Hershel Hollin created this Life Tributes page to make it easy to share your memories.

Send flowers to the Hollin family.