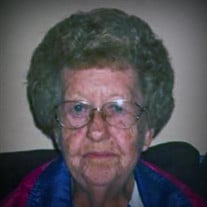 Mrs. Jones passed from this life early Tuesday morning at Jackson-Madison County General Hospital. The widow of Leonard Bob Jones who died Tuesday, December 23, 1980, she was born in McNairy County to the late Jesse Arthur Clark and Susie Ann Doles Clark. She spent her early life in Pocahontas moving to Bolivar in 1959. In addition to her husband and parents, she was preceded in death by a grandson, Michael Stephan Hall; two sisters, Lena Doles and Ruby Kirk; and three brothers, Will, Travis and Harmon Clark. She was united in marriage to Mr. Jones on September 8, 1951 and worked as a CNA at Brint's Nursing Home in Bolivar for many years. A member of Oak Grove Independent Methodist Church, she enjoyed sewing, fishing, her cats, gardening and being outside. She especially loved being around her family and other people. She leaves her daughter, Deborah Lambert (Butch) of Shelbyville, TN; two grandsons, Shawn Kirby (Candace) and Josh Kirby, both of Bethel Springs; six great-grandchildren Madison, Cameron, Jaxon, Zeeza and Carson Wayne Kirby and, Riven Norman; and several nieces and nephews. Memorials may be sent to the Exchange Club Carl Perkins Center for the Prevention of Child Abuse in McNairy or Hardeman County. [https://carlperkinscenter.org/get-involved/what-to-donate/donate-now/] While visiting or attending services for Mrs. Jones, please consider the following guidelines: * Maintain 6 feet between yourself and the next closest person; * Refrain from hugs and handshakes; * When you sneeze or cough, use your elbow to cover your nose and mouth; * Wash your hands often; * Avoid touching your face; and * Minimize time spent in places where people gather. Thank you for your consideration.

The family of Isabelle Clark Jones created this Life Tributes page to make it easy to share your memories.