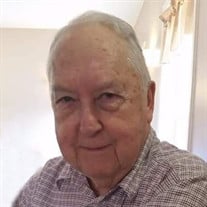 The family requests that masks be worn, and social distancing be practiced at the public visitation. Due to Covid-19 concerns, the family of Jack Bondell DeBerry, Sr., has chosen to honor him with a private service that will be live streamed starting at 11:00 a.m. Thursday, September 2, 2021. Jack Bondell DeBerry, age 91, left this Earthly life on Tuesday, August 24, 2021. Bondell is survived by his two daughters, Patti Berry and Jeanie Hopper, both of Hardin County, Tennessee. His grandchildren, Jack B. DeBerry III of Savannah, Tennessee, Jill Wild of Huntingdon, West Virginia, Josh Berry of Savannah, Tennessee, Ben Hopper and Anna Hopper, both of Savannah, Tennessee. He is also survived by his great-grandchildren Walker Wild, Brooks Berry, Daisy Wild, Carter Wild, Della Hopper, and Bridgley Hopper. Also, his step-grandchildren, Kaile and Jamison Cossey and Braxton McSwain. He is survived by his sister, Anne Styers of Savannah, Tennessee, and many nieces and nephews, all of whom he loved dearly. Bondell was preceeded in death by his son, Jack B. DeBerry II, mother, Edith DeBerry, father Reynolds DeBerry, brother Jerry DeBerry, and sisters, Aleene Hathcote and Reba Jean DeBerry. Bondell co-owned and operated the DeBerry Roofing Company for many years beginning in the early 1950s. He was a hard-working, fun-loving guy whose company was enjoyed by all who were fortunate enough to know him. In his later years, Bondell devoted his life to his family, mainly his grandchildren, and coin-collecting. Amongst the community, Bondell was known for his kindness, selflessness, and generosity to all that he encountered. Likely his greatest achievement was getting to know and love his great-grandchildren. At the time of his passing, Bondell was awaiting the arrival of his fourth-generational namesake, Jack B. DeBerry IIII, due to be born in October 2021. In honor of a man like no other, a life well-lived, and a soul more precious than jewels, Rest in Peace, “JB” DeBerry, better known as “Papaw.” The family would like to request in lieu of flowers and/or gifts, that a donation be made in his memory to the Darryl Worley Cancer Center or St. Jude Children's Research Hospital.

The family requests that masks be worn, and social distancing be practiced at the public visitation. Due to Covid-19 concerns, the family of Jack Bondell DeBerry, Sr., has chosen to honor him with a private service that will be live streamed... View Obituary & Service Information

The family of Jack Bondell DeBerry created this Life Tributes page to make it easy to share your memories.

The family requests that masks be worn, and social distancing...

Send flowers to the DeBerry family.