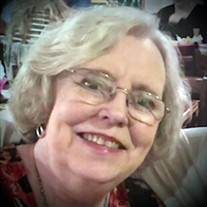 Mrs. Thrasher-Smith, age 73, passed from this life on Tuesday, October 19, 2021, in Jackson, TN. She was born in Memphis to the late Henry Grady, Sr., "Jack", and Rubye Tennyson Simpson on Wednesday, February 11, 1948, and was reared in Hornsby, TN. Mrs. Thrasher-Smith was a professional artist, specializing in oil painting before becoming a master gourd artist at her studio, Kudzu Korner. Previously, she worked in administration and in medical staffing. She married James Lewis Smith, Jr. on July 14, 1990. She had lived in San Antonio, TX, Okmulgee, OK and Midland, TX before returning to Hardeman County in 1979. Mrs. Smith was a Sunday School teacher most of her adult life, focusing on prophecy study, and mentoring young Christians in faith and art as a part of her testimony. She, also, was a writer of devotionals on the internet and read through her Bible every year. She and husband, James were members of West Memorial Baptist Church. Among her many interests, she was a member of the Hardeman County Chamber of Commerce where she was involved in the Tennessee State Forest Festival and served as a writer for the Bolivar Bulletin for many years. She also enjoyed working on the farm alongside her husband. The door to her home was always open to family, friends, or anyone in need and they were always shown love and Jesus. Her greatest loves were God, family, art and Fox News. Survivors include three daughters, Christy Thrasher Delashmit (Scottie) of Munford, Cynthia Thrasher Dickerson (Jamie) of Bolivar, and Zondra Smith Scott (Steve) of Lexington; a son, SFC Jimmy L. Smith (Summer) of Henderson; two brothers, James Barry Simpson (Tricia) of Sevierville and Henry Grady Simpson, Jr. (Jayne) of Huntingdon; eight grandchildren, Brittany & Jace Scott, Christopher & Daniel Delashmit, Sarah Dickerson, Mackenzie, Kacey and James Michael Smith; and one great-grandchild, Harper Raine Bailey. In addition to her parents, she was preceded in death by her husband, Staff Sgt. (R) James Lewis Smith, Jr. The family requests memorials be sent to Hospice of West Tennessee, Attention: Hospice House Foundation, at 1804 Hwy 45 Bypass, Ste. 100, Jackson, TN 38305. [http://www.wthfoundation.org] or Gideons International. [gideons.org]

Mrs. Thrasher-Smith, age 73, passed from this life on Tuesday, October 19, 2021, in Jackson, TN. She was born in Memphis to the late Henry Grady, Sr., "Jack", and Rubye Tennyson Simpson on Wednesday, February 11, 1948, and was reared in Hornsby,... View Obituary & Service Information

The family of Jackie Thrasher-Smith created this Life Tributes page to make it easy to share your memories.

Mrs. Thrasher-Smith, age 73, passed from this life on Tuesday,...

Send flowers to the Thrasher-Smith family.