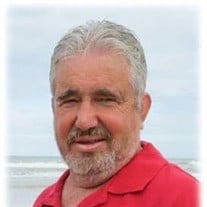 James Edward Daniel of Cypress Inn, TN was born November 11, 1945 in Collinwood, TN, the son of the late Jeffie Coolidge and Robbie Louise Brison Daniel. He was united in marriage to the former Cathey Sue Brewer on April 23, 1988 and was a welder... View Obituary & Service Information

The family of James Edward Daniel, Cypress Inn, TN created this Life Tributes page to make it easy to share your memories.