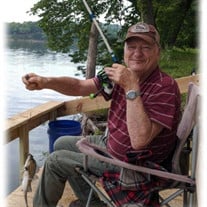 James Martin “Jim” or “Jimmy” Gann departed this life at Maury Regional Medical Center in Columbia, TN on Monday, February 7, 2022 at the age of 74. His health drastically worsened over the last few months and he suddenly lost his battle with kidney and heart disease, with his loving daughter-in-law, Regina by his side. His death came 3 years and 2 days after his precious wife, Wanda’s death. Jim was born in Columbus, Mississippi on April 27, 1947 to Martin A. and Eva Nell Billingsley Gann. His Daddy was deployed in the U.S. Navy at the time and Jim was one year old when he saw his Daddy for the first time. Jim wore braces on his legs and feet for several years of his young childhood to help correct a club foot. This never slowed him down and he spent many hours enjoying sports and outdoor activities, like hunting and fishing, with fishing becoming his life-long passion. He graduated from Collinwood High School in 1965 and then later got a Bachelor’s Degree and Master’s Degree in Science Education from UTM and UNA. He followed in his Daddy’s footsteps and became a life-long teacher. Jim began his teaching career in 1970 with the Wayne County Board of Education. His first job was teaching 4th grade, but he quickly moved to what he would spend most of his teaching career doing-teaching science. He taught science, biology, and chemistry at different times at both the middle school and high school levels in both Collinwood and Waynesboro. He even taught reading one year! He was well-known and well-loved by his students and fellow educators. His intelligence and wit were much to be admired and a joy to be around. He has always made quick friends everywhere he went. Jim retired from teaching in 2007 after 37 ½ years of being “Mr.Gann” to so many fortunate students and “Jimmy Gann” to so many work peers. After retirement, he could be found at the river, fishing. Most often he fished from the bank, with his trusted dog “Winnie” by his side. People often marveled at his ability to catch one fish after another, while others looked on without getting a nibble. One man at Pickwick would often bring his chair and just sit and watch him fish. He enjoyed many hours of fishing with his friends and family throughout his life. Jim married his sweetheart, Wanda Helton, in 1969. They welcomed their first child, Tonya in 1970 and their son, Jaime in 1974. Jim and Wanda were happily married for almost 50 years, before Wanda’s sudden passing in 2019. Jim was devastated. He left Wayne County shortly thereafter to live near his son in Lewisburg, TN and he has spent the last three years going back and forth from there to his beloved Wayne County- always with Winnie by his side. He was always so proud of his family-his children Tonya and Jaime, and his seven grandchildren and ten great-grandchildren. He was their beloved Daddy, Paw Paw, and also a beloved big brother and uncle. His nieces and nephews adored “Uncle Jim”! He was a pure joy to be around for everyone in the family and everyone who knew him. His smile and intelligence and humor and wit will be greatly missed! Jim was preceded in death by his wife, Wanda Ann Helton Gann, his parents, Martin A. and Eva Nell Gann, his baby sister, Sherry Gann, his grandparents, Chester F. and Auneeta Fields Billingsley and Acklin and Nettie Mays Gann. Jim is survived by his children, Tonya Gann Simmons (Ty) of Florence, AL and James “Jaime” Gann (Regina) of Lewisburg, TN, his grandchildren, Dustin Simmons (Courtney), and Michael Simmons (Tiffany) both of Florence, AL, Melanie Simmons Terry (Blake), Andrew Simmons (Melanie), Brandon Simmons (Danielle) all of Killen, AL, and Aaron Gann and Ryan Gann of Lewisburg, TN, his great-grandchildren, Emma Helmick, Raylan Simmons, Ava Grace Simmons, Brantley Simmons, Riley Simmons all of Florence, AL, Ashton Terry, Caleb Simmons, Leo Simmons, Ryder Simmons, and Caden Simmons all of Killen, AL, his brothers and sisters, Carol Gann Crews (David) of Cypress Inn, TN, Duane Gann (Sandy) of Tupelo, MS, Cathy Gann Jones (Steve) and Renee Gann Littlejohn (Jonathan) of Collinwood, TN, and countless nieces, nephews, great-nieces, great-nephews, aunts, cousins, in-laws, friends, and loved ones who will miss him dearly. Visitation will be held on Thursday, February 10, 2022 from 5:00 p.m. until 8:00 p.m. and also on Friday, February 11, 2022 from 9:00 a.m. until 10:30 a.m. at the Shackelford Funeral Directors in Collinwood, TN. Funeral Services will be held on Friday, February 11, 2022 at 11:00 a.m. at the Shackelford Funeral Directors in Collinwood, TN with Nolan Burns and Stephen Stults officiating. Burial will follow in the Mt. Hebron Cemetery in Collinwood, TN. Shackelford Funeral Directors of Wayne County assisting the family. Pallbearers: Dustin Simmons, Michael Simmons, Andrew Simmons, Brandon Simmons, Aaron Gann, and Ryan Gann

The family of James "Jimmy" Gann created this Life Tributes page to make it easy to share your memories.

Send flowers to the Gann family.