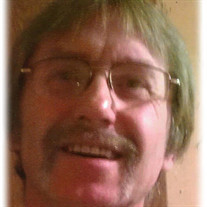 Mr. James "Jimmy" Frances Hoesel was born July 10, 1960 in Buffalo, NY the son the late Raymond Hoesel and Gloria LeBoeuf Hoesel Anderson and late step-father, Richard Anderson. After high school, he went to Sri Lanka as a foreign exchange student for 6 months. He will be lovingly remembered as a very adventurous person that would try anything once. He made his career as a Master Craftsman as he loved to build. Later in life when his health was not as good as it once was, he loved working with his step-sons on building projects where he served as the supervisor. If you were around him very long, you would quickly see his love for the Buffalo Bills, the Buffalo Sabers and the Beatles! Second to none was the time he spent with his family. He loved spending time with the kids, grandkids and great grandkids. From early years to more recent times, he loved a good game of Risk, that sometimes would last a few hours or other times would last a few days! He attended the Collinwood Church of God. Mr. Jimmy departed this life on March 30, 2022 in Columbia, Tennessee at the age of 61 Years, 8 Months and 20 Days. Those left to cherish his memory include his mother, Gloria LeBoeuf Hoesel Anderson, life-partner Mattie Garrett of Waynesboro, TN; two step-sons, Allen Garrett (Jackie) of Waynesboro, TN; Jason Garrett (Rachael) of Lawrenceburg, TN; a step-daughter, Kristy Risner (Harvey) of Waynesboro TN; two brothers, Ronald Hoesel of Mayville , NY, Donald Hoesel and wife Sandy of Lackawana, NY; a sister, Lorraine "Lori" Deponceau and husband Dominic of Westfield, NY; He is also survived by nine step grandchildren, Rachel Risner, Austin Gambrell, Jasmine Garrett, Hailey Garrett, Avery Garrett, William Rush, Johnathan Rush, Madison Risner, Alissa Risner; and three step-great grandchildren: Kyler, Abree and Levi Mitchell. He is also survived by two special friends he had nicknamed "His Sweeties" years ago, Evelyn Hardy and Avery Garrett. In addition to his parents and step-father, Mr. Hoesel was preceded in death by three brothers, Raymond Hoesel, Eugene Hoesel, Leon Hoesel; a step grandson Stetson Risner and a step granddaughter, Olivia Garrett. Visitation will be held on Sunday April 3, 2022 from 5:00 PM until 9:00 PM and again on Monday April 4, 2022 from 8:00 AM until service time at 3:00 PM all at Shackelford Funeral Directors, Waynesboro. Services will be held on Monday April 4, 2022 at 3:00 PM at Shackelford Funeral Directors, Waynesboro, with Nelson Moffit officiating. Burial will follow in the Old Town Cemetery at Waynesboro, Tennessee with Shackelford Funeral Directors assisting the family.

The family of James "Jimmy" Frances Hoesel created this Life Tributes page to make it easy to share your memories.

Send flowers to the Hoesel family.