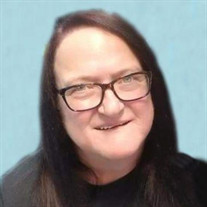 JAN BOVITZ Henderson, TN: Janice “Jan” Lee Bovitz, age 58 passed away, June 28, 2021 at her home. She was born June, 2, 1963 in Camden, TN, daughter of the late James Willie and Irene Douglas Summers. She later went to nursing school in Texas and became an LPN. She worked as a nurse in Texas, Michigan and Tennessee working primarily in nursing homes. She moved from Jackson, TN to Henderson in 2019. She was a faithful Christian who loved music and enjoyed playing the piano and singing in church. She enjoyed going out to eat, especially at buffets. She was a wonderful mother and grandmother to her three daughters and 15 grandchildren, whom she adored. She is survived by daughters, Janice Raley (Matt Ivy) of Milan, Corrina Spain (Sid) of Henderson and Cindy Hornsby (Chris) of Beech Bluff; 15 grandchildren, Shelbie, Dakota, Tiffany, and Dalton Raley, Caleb, Katelyn, Brayden and Saylor Spain, Athan Holloway, Raven Myatt, Diamonte Buchholtz, Margo, Gage, Ava and Noah Hornsby, and one great grandchild, Michael Ray. In addition to her parents, she was preceded in death by a brother, Thomas Summers and a sister, Lillian Porter. Funeral services will be 11:00 AM Thursday, at Shackelford Funeral Directors – Crook Avenue Chapel. Burial will follow in Mason Wells Baptist Church Cemetery. The family will receive friends 5:00 PM until 8:00 PM Wednesday at Crook Avenue Chapel. Shackelford Funeral Directors of Henderson 731-989-2421

The family of Jan Bovitz - Henderson created this Life Tributes page to make it easy to share your memories.

Send flowers to the Bovitz family.