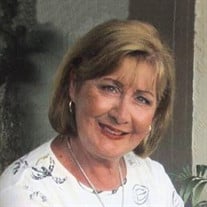 JAN MELTON Henderson, TN: Janice Gayle Melton age 72 passed away March 9, 2022, at Vanderbilt Medical Center in Nashville, TN. She was born October 18, 1949 in Oklahoma City, OK the daughter of the late Harrold F. and JoEva Burton Sand. She grew up in Oklahoma City and was a 1967 graduate of Putnan City High School. She worked for General Motors in Oklahoma City as Office Administrator for most of her working career almost twenty years. She married Phil Melton Feb. 13, 1982 and they enjoyed forty years together. They moved to Henderson in 1985. She began working for Town & Country Realtors in Jackson and retired in 2006. She was an animal lover, especially horses and dogs, she enjoyed the outdoors. She was a big fan of OU Football. She loved her family and especially loved spending time with her grandchildren. She was a member of the First Baptist Church in Henderson. Mrs. Melton is survived by her husband, Phil Melton of Henderson; a son, Jeff Briscoe (Kimberly) of Jackson; a daughter, Malinda Truog (Ross) of Springfield, FL; three grandchildren, Nathan Briscoe, Maia Truog and Madi Truog and a grandchild by love, Harley Johnson; a brother, Harold Sand (Sharron) of Wagoner, OK and two sisters, Sharon Stone (Cecil) of Nashville, TN and Gwen Wharton (Bart) of Norman, OK; and also numerous nieces and nephews. She was preceded in death by her parents, her in-laws, Mel Melton and Ginney Trice Melton and Francis Lile Melton. Funeral services will be 2:00 PM Monday, March 14th at First Baptist Church with Tracy Snyder officiating. Burial will follow in Henderson City Cemetery. The family will receive friends at First Baptist Church 12:00 PM until 2:00 PM Monday service time. In lieu of flowers memorial donations may be made to First Baptist Church in Henderson. Shackelford Funeral Directors of Henderson 731-989-2421

The family of Jan Melton of Henderson, TN created this Life Tributes page to make it easy to share your memories.

Send flowers to the Melton family.