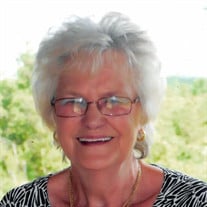 Mrs. Willoughby, age 84, the widow of Elvin Willoughby (d. March 1, 2014), departed this life on Thursday afternoon, September 16th, at Bolivar General Hospital. She was born Sunday, May 30, 1937, in Hardeman County, daughter of the late Floyd and Allie King Thearp and lived her life here in the county. She married Elvin on February 1, 1964, and previously worked at Kilgore. She retired from Thyssen-Krupp from wiring the buttons on elevators and was a homemaker, raising their 4 children. When she was at home, she did sewing and clothing repairs for the public and enjoyed quilting, crocheting and cooking, especially when she had visitors over, and cooking her grandkids favorite meals for them. Mrs. Willoughby was a member of Toone Baptist Church. Survivors include two daughters, Peggy Brotherton (Greg) of Water Valley, MS and Denise Johnson of Bolivar; a son, Elvin D. Willoughby, Jr. (Phyllis) of Silerton; 9 grandchildren, 18 great grandchildren, 2 step great grandchildren; and two sisters, Brenda Sipes of Jackson and Geneail Ervin of Bolivar. In addition to her parents and husband, she was preceded in death by a daughter, Judy Ann Bass Howell in 1992; a sister, Parthenia McKee and 3 brothers, Robert Glen, Jimmy and Eugene Thearp. Memorial contributions in her name may be sent to Hospice of West Tennessee.

The family of Jeanette T. Willoughby created this Life Tributes page to make it easy to share your memories.

Send flowers to the Willoughby family.