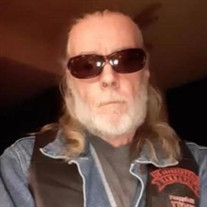 Jeff Blount was born in Hardin County, Tennessee on August 22, 1965 the son of Gayle Jeter Williams and the late Dean Blount. Jeff served his country proudly in the United States Air Force. He was a member of Olivet Cumberland Presbyterian... View Obituary & Service Information

The family of Jeff Blount created this Life Tributes page to make it easy to share your memories.

was born in Hardin County, Tennessee on August 22,...

Send flowers to the Blount family.