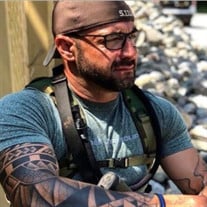 JEREMY ALLEN YARBER Henderson, TN: Jeremy Allen Yarber, age 43 passed away July 4, 2021 at his home. He was born November 27, 1977 in Memphis, the son of Jeffrey Allen Yarber and Judy Ann Coleman. He grew up in Iuka, MS and Southaven, MS. He married Gina Stewart on August 15, 1997. They made their home in Southaven. He joined the U.S. Army in May 2006 and served eight years as a MP. After his military service he continued his career in law enforcement working with the Madison County Police Office as a Deputy Sheriff and a member of the Swat Team. He was a member of the First United Methodist Church in Selmer. He enjoyed fishing, fitness, working on cars his dogs and spending time at his cabin. He is survived by his wife, Regina Lynn Stewart Yarber of Henderson; two sons, Corey Dalton Yarber (Paige Nicole) of Starkville, MS and Ryan Cole Yarber of Henderson, TN; his mother, Judy Ann Coleman Johnson of Southaven, MS and father, Jeffrey Allen Yarber and stepmother, Tammy of Iuka, MS; two brothers, Dustin Yarber (Johnna) of Corinth, MS and Brett Coop (Joey) of Horn Lake, MS and a sister, Misty Glidewell (Jeremy) of Burnsville, MS; his grandmother, Jeane Coleman of Southaven, MS. Memorial services will be 6:00 PM Friday, July 23rd at Shackelford Funeral Directors – Crook Avenue Chapel with Dustin Stone and family members officiating. The family will receive friends at Crook Avenue 5:00 PM until 6:00 PM service time on Friday. In lieu of flowers donations may be made to ffdogs.org Shackelford Funeral Directors of Henderson 731-989-2421

The family of Jeremy Yarber of Henderson, TN created this Life Tributes page to make it easy to share your memories.

Send flowers to the Yarber family.