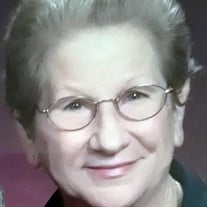 Jerry E. Trainum, 84 years 10 months, 15 days, of Middleton, passed from this life Saturday, January 9, 2021 at Jackson-Madison County General Hospital. She was born Tuesday, February 25, 1936 in Saulsbury, daughter of the late Robert E. Downen and Cuba Lipford Downen and lived her whole life here. She married Jimmie Neal Trainum on July 25, 1954 and was a homemaker, raising and taking care of her children. She was a member of Trinity Baptist Church where she worked in the nursery and with the teens. Survivors include her husband of 66 1/2 years, Jimmie Neal Trainum; a daughter, Pam Grantham (Rickey) of Middleton; a son, Steve Trainum (Cheryl) of Bolivar; two brothers, Leon Downen of Hernando, MS and Robert Downen of Middleton; five grandchildren, Mendy Murphy (Wesley), Kelly Grantham, Amber Majors (Bryce), Ashley and Autumn Trainum; and seven great grandchildren, Haley, Gracie, Savannah, Layla, Westin, Zachary and Zoey. In addition to her parents, she was preceded in death by five half sisters, Edver Pope, Earline Smith, Bessie Jeter, Mary Byrd and Esther Roberts; two brothers, Hugh and Joe Downen; and four half brothers, Nathan Earnest, Bill, Wallace and Douglas Downen. Memorial contributions in her name may be sent to Trinity Baptist Church. ****MASKS OR FACIAL COVERINGS ARE REQUESTED FOR ALL IN ATTENDANCE**** While visiting or attending services for Mrs. Trainum, please consider the following guidelines: * Maintain 6 feet between yourself and the next closest person; * Refrain from hugs and handshakes; * When you sneeze or cough, use your elbow to cover your nose and mouth; * Wash your hands often; * Avoid touching your face; and * Minimize time spent in places where people gather.

The family of Jerry E. Trainum created this Life Tributes page to make it easy to share your memories.

Send flowers to the Trainum family.