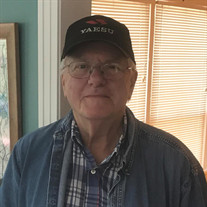 Jerry Alan Walker departed this life on Wednesday, June 16, 2021, at the age of 77 years, 11 months, and 5 days. He was born in Bethel, Ohio on July 11, 1943, the son of the late John Roscoe Walker and Margaret Durst Walker. On September 24, 1970, he was united in marriage to Marie Hamilton, who survives. Jerry served his country honorably in the United States Army. He had lived in Ohio most of his life, working for Sony Corporation as a General Manager, and had recently moved to Tennessee. He was an amateur radio operator and loved his dog. Jerry is survived by his wife, Marie Walker; sons, Scott Ealy and his wife Anna, and Jeff Ealy and his wife Lisa; grandchildren, Ryan, Drew, Brock, Brady, David, Madison, and Walker; great grandchildren, Nora and Jack; and a brother, Denny Walker. In addition to his parents, Jerry was preceded in death by a son, Kirby Ealy and a brother, Nelson Walker.

The family of Jerry Walker created this Life Tributes page to make it easy to share your memories.