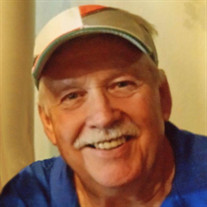 Jim Maw departed this life on Monday, November 29, 2021, at the age of 75 years, 9 months, and 8 days. He was born in Burbank, California on February 21, 1946, the son of the late Dale and Gladys Cook Maw. On September 3, 1982, he was united in marriage to Ruthie Kloth, who survives. Jim served his country honorably in the United States Marine Corp. and had worked for Sysco Foods for 26 years. He was an outdoors man, enjoyed hunting,and riding his side-by-side on his farm. Jim was a lifetime member of the NRA, North American Hunting Club. He was an avid gun collector and enjoyed reloading shells. He was a member and Sunday school teacher at Living Word Fellowship. He was a prayer warrior, loved people, enjoyed teaching them, and for 10 years was a teacher with Teen Challenge. In addition to his wife Ruthie Maw of Finger, Tennessee, James is survived by his children, Bryan James Maw and his wife Molly of Terry, Mississippi, Brent Allen Maw and his wife Felisha of Adamsville, Tennessee, Nancy Jean Vogt and her husband Marc of Wellington, Colorado, and Timothy Maw of Temecula, California; grandchildren, Ashley Vogt, Alec Maw, Brandon Vogt, Kaley Maw, Desmond Maw, Madyson Maw, Hunter Maw, Paylin Maw, Harper aka "Boogie" Maw, Keirsten Presley, Riley Presley, Trinity Maw, and Joshua Maw; sisters, Sandra Steidley Rome, Georgia, Susan Thompson of Humboldt, Nebraska, and Sharon Martin of Virginia; and a brother, Clyde Maw of Oklahoma City, Oklahoma.

The family of Jim Maw created this Life Tributes page to make it easy to share your memories.

Send flowers to the Maw family.