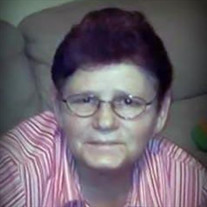 Joanne Sides, 69, of Bolivar, TN , departed this life Sunday evening, March 14, 2021 at her home.  She was born Sunday, November 4, 1951, in Memphis, TN, daughter of the late Frank and Elmer Lee Harville Weaver. She moved from Fayette County to Hardeman County in 2003. She married Clifford Cox on February 14, 2005. She worked as a salesperson with retail stores and several retail outlets, prior to becoming disabled. She enjoyed gardening, traveling and shopping, but her greatest enjoyment came from being around her grandchildren and great grandchildren, whom she dearly loved.  In addition to her husband, Clifford Cox, survivors include two daughters, Tammy Turpin (Michael) of Bolivar, TN and Lisa Taylor (Thomas) of Somerville, TN; a son, Earl Sides (Missy) of Holly Springs, MS; a brother, Robert Weaver of Laconia, TN; 8 grandchildren and 10 great grandchildren. In addition to her parents, she was preceded in death by 7 brothers and 3 sisters. Memorial contributions in her name may be sent to St. Jude Children's Research Hospital

The family of Joanne Sides created this Life Tributes page to make it easy to share your memories.

Send flowers to the Sides family.