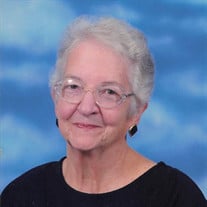 JOANNE TALLEY VANCLEAVE Henderson, TN: Marion Joanne Talley VanCleave, age 84, passed away January 31, 2022 at Southern Oaks Senior Living in Henderson, TN. She was born December 19, 1937 in the Talley Store Community of Chester County, the daughter of the late Riley Allen Talley, Jr. (R.A.) and Ruth Augusta Sewell Talley. She graduated from Chester County High School in 1955 and attended Bethel College. She worked at the Cumberland Presbyterian Center in Memphis and then at First State Bank in Henderson from 1957 to 1968 and worked at Production Credit Association from 1968 until 1983. She worked at Southwest Human Resource Agency for thirty years, retiring in July of 2014 as Cash Disbursements Clerk. She was very active at Oak Grove Cumberland Presbyterian Church where she attended all of her life, she served in many capacities there including piano playing and Sunday school teacher. She also served on the committee to manage Oak Grove Cemetery. She was a member of the Chester County Historical Society, had served on the Chester County Senior Citizen Board, a former member of the BP&W, former Jayceete and had kept records and organized reunions for the class of 1955. Mrs. VanCleave is survived by a daughter, Ann Shearon (Tommy) of Jackson; two sons, B. J. VanCleave (Pat) of Chesterfield and Gene Allen VanCleave of Ormond Beach, FL three grandchildren, Jessica Droke, Samantha VanCleave Belisle and Sarah Droke and a brother, Dossie Talley of Henderson and two step grandchildren, Ginger Austin and Christy Shearon Funeral services will be 2:00 PM Saturday, February 5th at Shackelford Funeral Directors – Crook Avenue with Neal Smith and John Talbott officiating along with Ann, Gene, and B. J. Burial will follow in Oak Grove Cemetery. The family will receive friends at Crook Avenue 5:00 PM until 8:00 PM on Friday and 10:00 AM until 2:00 PM on Saturday. Memorials may be made to the Oak Grove Perpetual Cemetery Fund c/o Patti Pickler, P. O. Box 448, Henderson, TN 38340 or the Chester County Historical Society or Gideons International. The family request facial covering be worn at visitation and funeral service. Shackelford Funeral Directors of Henderson 731-989-2421

The family of Joanne Talley VanCleave - Henderson, TN created this Life Tributes page to make it easy to share your memories.

Send flowers to the VanCleave family.