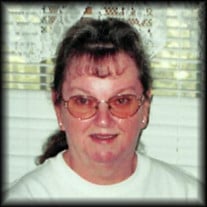 Joetta Siler Brittain, age 74, of Bolivar, departed this life on Friday morning, April 16, 2021 at Jackson-Madison County General Hospital. She was the daughter of the late Inman and Mamie Wilson Siler. In addition to her parents, she was preceded in death by husband, Marvin Leon Brittain; former husband, Billy Joe Ervin; son, Jackie Brittain; and five brothers: two deceased infants and Jerry, John and David Siler. She was born in Hardeman County on Wednesday February 19, 1947 and lived here until moving to Lexington in 1988. Mrs. Brittain returned to Hardeman County in 2013. She had worked as a CNA at Threet's Retirement Home in Toone and for The Manor in Lexington. She also had worked at the Bank of Bolivar. On April 3, 1988, she was united in marriage to Mr. Brittain who passed from this life on June 26, 2012. She was a member of Trinity Baptist Church in Bolivar at the time of her death and had also attended worship at Stone Hill Pentecostal in Lexington, Toone Baptist Church, Piney Grove and Walnut Grove Baptist Churches in Hardeman County. She was a faithful Christian who loved her God and church family. Mrs. Brittain is described by her family as a great Momma and Grand-Momma who loved spending time with them. She was a member of the Eastern Star, as well. She is survived by children, Billy (Pam) Ervin of Bolivar, Andy (Sonya) Ervin of Kenton, TN, Diane (Sam) Holmes and Debbie (Willie) Hayes, both of Lexington, and Lee (Peggy) Brittain of Omaha, NE; 12 grandchildren, Megan (fiance', Quinn), Dillon, Olivia, Sammy, Eric, Tameria, Josh, Ashley, Kim, Sandy, Little Willie and Jackie; and six great-grandchildren, Trent, Jake, Andrew, Dean, Layla and Waylon. Memorials can be sent to the American Cancer Society (http://www.cancer.org); the American Diabetes Association (http://www.diabetes.org); or the Hardeman County Rescue Squad (http://www.facebook.com/Hardemancountyrescue/)

Joetta Siler Brittain, age 74, of Bolivar, departed this life on Friday morning, April 16, 2021 at Jackson-Madison County General Hospital. She was the daughter of the late Inman and Mamie Wilson Siler. In addition to her parents, she was... View Obituary & Service Information

The family of Joetta Siler Brittain created this Life Tributes page to make it easy to share your memories.

Send flowers to the Brittain family.