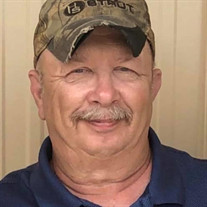 Funeral services for John Andrew Nelson, III, age 69, of Toone, will be 4:00 pm, Sunday, September 5, 2021 at Parrans Chapel Baptist Church. Burial will be in the church cemetery. Visitation is Sunday from 2:00 - 4:00 pm at the church. ** The family requests everyone attending the visitation or service please wear a mask or facial covering ** Mr. Nelson departed this life early Monday morning, September 1, 2021, at Jackson-Madison County General Hospital. A native of Middletown, NY, he lived most of his life there where he worked as a security guard. After retirement, John moved to Tennessee, first living in Waynesboro for about 10 years then moving to Toone after his marriage to the former Kelly Fazekas on July 22, 2015. A loving husband and father, John was a huge NY Mets fan who also enjoyed playing guitar, fishing and photography. He was a member of the board of directors for the Hardeman County Arts Council. One of his favorite activities was playing Santa Claus at Christmas for the children in the local Head Start program. He leaves his wife, Kelly Nelson of Toone; two daughters, Heather Wyllyamz (Matteo) of Ithaca, NY and Jessica Feshold (Mike) of New Platz, NY; one son, Brian Nelson of Spring Hill, FL; two step-sons, Justin Foppiano (Cristy) of Slidell, LA and Eric Foppiano of Toone; one sister, Beth Nelson of Middletown, NY; one brother, Darrel Nelson (Jennifer) of Middletown; and 7 grandchildren, Kramer, Sagan, Elyssa, Emily, Ethan, Redding and Kyra. Mr. Nelson was preceded in death by his father, John Andrew Nelson, II; and a sister, Cheryl Nelson. Memorials may be sent to St. Jude Children's Research Hospital, Memphis, TN. http://www.stjude.org

Funeral services for John Andrew Nelson, III, age 69, of Toone, will be 4:00 pm, Sunday, September 5, 2021 at Parrans Chapel Baptist Church. Burial will be in the church cemetery. Visitation is Sunday from 2:00 - 4:00 pm at the church. **... View Obituary & Service Information

The family of John Andrew Nelson, III created this Life Tributes page to make it easy to share your memories.