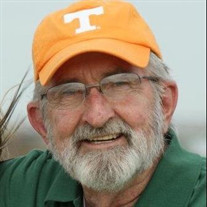 John "J.D." L. Deal, Jr. was born on May 24, 1938 in Memphis, Tennessee, the son of the late Reverend John Leonard Deal, Sr. and Virginia Morrison Deal. Mr. Deal honorably served his country in the United States Air Force for 4 years then went to work for the United States Postal Service as a postal clerk. He lived in Memphis, Tennessee all his life and ran his own business making custom kitchen cabinets for 40 years. He loved woodworking, being outdoors, playing cards and pool, hunting, fishing, gardening, and was a big Tennessee football fan. His favorite passtime was playing golf. John "J.D." L. Deal, Jr. departed this life on January 9, 2021 in Adamsville, Tennessee at the age of 82 years, 7 months, and 16 days. He is survived by his daughters, Cindy Weaver and her fiance Don of Bartlett, Tennessee, Elayna Moore and her husband Kevin of Counce, Tennessee, Angela Powell and her husband Joe of Olive Branch, Mississippi, Amy Waltermyer of Olive Branch, Mississippi, and Audrey Baird of Memphis, Tennessee; brother, William Deal; sister, Judi Cultra; 12 grandchildren; and 10 great grandchildren. In addition to his parents, he was preceded in death by his sister, Ginger Ward and brother, Kenny Deal. Memorial Donations may be made to the Alzheimer's Association.

The family of John "J.D." L. Deal, Jr. created this Life Tributes page to make it easy to share your memories.