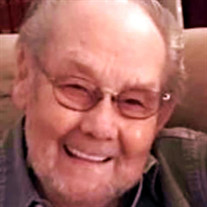 John Howard Jordan, 86, of Silerton, passed away early Monday morning, May 3rd, at Bolivar General Hospital. Mr. Jordan was a native of Hardeman County and the son of the late Hollis and Gladys Wiley Jordan. He was a 1953 graduate of Bolivar Central High School. In 1955, at the age of 19, he joined the US Navy where he served his country for 22 years achieving the rank of Chief Petty Officer. It was during this time, he met Mary Jean Gardner. John Howard and Mary Jean were married in Oakland, CA on October 8, 1958. Mrs. Jordan departed this life on March 1, 2021. While in the military, the Jordan's lived in many different locales such as, Japan, Okinawa, Texas and Washington state, just to name a few. Mr. Jordan did four tours of duty aboard ship serving as a jet airplane mechanic. He was a very proud US Navy Veteran. As a result of his time in service, Mr. Jordan remained an airplane enthusiast his entire life. Upon his retirement, he returned to Hardeman County, where he worked at Harmon Automotive for 10 years and at Olean Tile in Jackson for 15 years. He was an active member of the Piney Grove Baptist Church. While living in Silerton, he was instrumental in founding the Volunteer Fire Department and served as Chief for many years. In his leisure time, he enjoyed tinkering with all types of engines and keep everything in and around his home serviced and running well. Mr. Jordan was gifted with a great sense of humor and many times could be found trying to lighten the mood or lift spirits. He leaves his daughter, Jackie Henson of Whiteville; his son, Johnny A. Jordan of Henderson; four grandchildren, Paul Wesley Wooten, Jordan Henson, Telisa (Jeremy) Malone and Jessica Henson; and two great-grandchildren, Karissa and Kara Malone. He was preceded in death by his parents; a sister, Patty Sue Jordan; and a son-in-law, Billy Joe Henson. Memorials may be sent to the Piney Grove Baptist Church or Silerton Volunteer Fire Department.

John Howard Jordan, 86, of Silerton, passed away early Monday morning, May 3rd, at Bolivar General Hospital. Mr. Jordan was a native of Hardeman County and the son of the late Hollis and Gladys Wiley Jordan. He was a 1953 graduate of Bolivar... View Obituary & Service Information

The family of John Howard Jordan created this Life Tributes page to make it easy to share your memories.