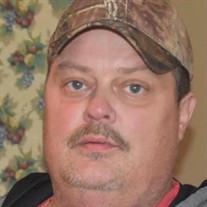 John W. Wright, Jr. was born at 1:25 p.m. at Baptist Memorial Hospital in Memphis, Tennessee, on Friday December 1, 1972, to John and Sherry Wright. He left this world on Thursday, August 12, 2021, at 465 North Road, Milledgeville, Tennessee. John was raised in Memphis and attended school at Sky View Academy and Frayser High School. John worked with his Uncle Billie Joe Johnson in heating and air conditioning, and later drove a wrecker for several different wrecker companies in Memphis. While working for a wrecker company, he injured his back and was unable to work. In 2002, he moved to Milledgeville, Tennessee, and remained in this area until his death. John loved to watch NASCAR racing and wrestling, hobbies that he acquired from his Uncle Billie Joe. John also loved to be on the water driving a Pontoon or fishing. If you were privileged to have him for your friend, you were lucky. John would do anything for his friends. A trait that sometimes didn't turn out well for him. John was known by several nicknames. Of course, he was called John, but he was also called John-John, Lil John, LJ, and Big Boy. When he was younger, he was called Little John and his dad was called Big John, but as John got older, his Paw-Paw Bobby said that the names needed to be switched because John had outgrown that name. John is survived by his children, Kevin Wright and Carmen Pedersen (Danial); his grandchildren, Alexis and Miles Pedersen; his parents, John and Sherry Wright; his sister, Amanda Bond (David); lots and lots of family - aunts, uncles, cousins, and many friends. He was preceded in death by his grandparents, Bobby and Shirley Johnson of Milledgeville, Bidwell Wright of California, and Ed and Eloise Vaughan of Hardeman County.

The family of John W. Wright, Jr. created this Life Tributes page to make it easy to share your memories.