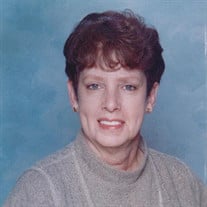 Joyce Kay Armour peacefully left this earth on February 20, 2022 at 78 years of age. She is preceded in death by her parents, William Herbert Alsip and Grace Lee Alsip, two brothers, Kenneth Alsip (Christine) and Herbert Alsip Jr., four sisters, Alene Solomon (Hallie), Lois Leach-Barnett (Calvin), Elizabeth Black, and Barbara Walker (Jerry), father and mother-in-law, Burl and Deffie Armour, sister-in-law, Mary Floyd, brother-in-law Zane Harrison, and grandson, Trevor White. She is survived by her husband, James Armour, three daughters, Debbie Barker (Mike), Becky Watkins (Stanley), and Susan White (Randy), grandchildren, Michelle Wilbanks (Robert), Jake Watkins (Autumn), Morgan White, and Lucca White, great-grandson, Erik Wilbanks, in-laws Sorrita Alsip, Dolphus Armour (Naomi), Melba Harrison, Ronald Armour (Faye), and many extended family and friends, including her special childhood friend, Ruthie Mathis. Born on October 15, 1943 in Grantsburg, Illinois, Joyce was the youngest of seven children. She met James Armour while he was serving in the armed forces in Naperville, IL, and they were united in marriage on December 4, 1959. They lived in Naperville for several years before relocating to Selmer, TN where they opened Armour Bros. Air Conditioning and J&J Appliances and Electronics, which they owned and operated for many years. During that time, she also served as part owner and operator of Armour’s Cafe alongside her mother-in-law. During her free time, Joyce was active in the Jaycees for many years. She loved cooking, gardening, and spending time with family and friends. She especially enjoyed holidays and family gatherings, playing Canasta with dear friends, and connecting with her Sunday school group. She greatly enjoyed traveling, whether it was going to the beach, visiting her hometown, winning a trip to Madrid, Spain, or taking motorcycle trips all over the country, her favorites of which were to Arizona, Colorado, and Canada. Wherever she went, Joyce always brought an air of positivity and joy; she had an undeniable zest for life. She cared deeply for others, leaving behind a legacy of compassion that will continue on in the hearts of all who knew and loved her. In lieu of flowers, the family requests that donations be made to St. Jude Children’s Research Hospital in Joyce’s memory.

The family of Joyce Kay Armour of Selmer, TN created this Life Tributes page to make it easy to share your memories.

Send flowers to the Armour family.