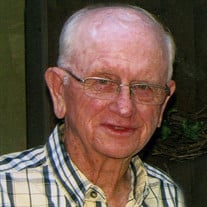 C.D. GUINN, JR. Henderson, TN: Clarence Dee Guinn, Jr. age 91 passed away Saturday morning June 26, 2021 at Southern Oaks Assisted Living in Henderson. He was born September 25, 1929 at Henderson, the son of the late Clarence Dee Guinn, Sr. and Clela Gillion Guinn. He graduated from Chester County High School in 1947 and attended Freed Hardeman College for two years. He married Lerlene Butler on November 25, 1950. He entered the U.S. Navy in March 1952 and served as an Airplane Captain in the Naval Airforce. He received the National Defense Service Medal and was honorably discharged from the U. S. Navy in September 1954, and served two years in the Naval Reserve. He returned to Henderson and worked for Oscar Freeman, Adams Motor Company in Jackson and started Guinn Brothers Incorporated in 1955 with his brother Wasel. They operated Guinn Brothers for forty-three years. He had been an avid horse enthusiast all of his adult life having rode and trained Tennessee Walking Horses. He was a member of the “Over The Hill Gang” a group of trail riders. He often posted the flag during the opening ceremony at the Chester County Lions Club annual horse show. He was a member of the First Baptist Church and served as a deacon since 1965. He had served in every office of the church. Mr. Guinn is survived by nephews and nieces, David Guinn (Darlene), Janice Guinn, Wayne Guinn, Rose Kaiser (George), Patricia Trouard (Jimmy), Doug Leath (Karen), Jason Butler (Kathy) and Justin Butler (Cybele) and a brother-in-law, Bud Butler. He was preceded in death by his parents, his wife, Lerlene Butler Guinn on May 20, 2016; two brothers, Orville Guinn and Wasel Guinn and a nephew, Steve Guinn. Funeral services will be 2:00 PM Friday at the First Baptist Church Henderson with Bro. Stan Smith and Bro. Brad Patterson officiating. Burial will follow in Henderson City Cemetery. The family will receive friends at Shackelford Funeral Directors Crook Avenue Chapel from 5:00 PM until 8:00 Thursday and Friday from 12 noon until funeral time of 2:00 PM at the church. Shackelford Funeral Directors of Henderson 731-989-2421

The family of Junior Guinn created this Life Tributes page to make it easy to share your memories.

Send flowers to the Guinn family.