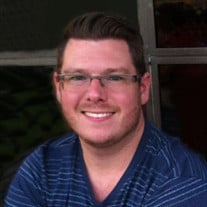 Kai Alexander Foust was born in Jackson, Tennessee on October 31, 1983, welcomed by his parents Keith and Kim Shelby Foust. He was raised in the Cerro Gordo community of Hardin County, Tennessee. Kai attended Hardin County Schools and was home schooled in his later high school years. He continued his education at UNA and MTSU where he obtained his Masters Degree in Business and Accounting. Kai was employed with American Bath Group as an accountant and a member of Grace Church in Nashville, Tennessee. Through a family friend Kai met his great love, his everything,  Alexa Mann. They had their first date on May 3, 2015, and Kai, wasting no time, proposed on July 3 and 17 days later on July 20, 2015, they were married in Panama City Beach, Florida. It was a whirlwind romance...but as Kai would always say, "When you know, you know." Kai was a hard worker and a person of integrity and honesty, values that he exhibited no matter the occasion. He was gracious in all things, a wonderful husband, father, son, brother, and friend. He had a special bond above all others, one that cannot be put into words with his brother, Kasey. If you ever saw them together, then you know how truly special it was. Kai loved music and the Lord. He used his love of music as a ministry, leading praise and worship at Teen Challenge, and for several years as a member of the praise and worship band at Love and Truth Church. He was artistic, writing beautiful poetry, had a love for photography, and was a wonderful...some would say gourmet level cook. Kai Alexander Foust left us suddenly on Sunday, July 12, 2020, at the age of 36 years, 8 months, and 12 days. He is survived by his wife, Alexa Foust of Savannah, Tennessee; his children, Shelby Kate Foust, Ryland Alexander Foust, and two children that they have fostered and love as their very own, all of Savannah, Tennessee; parents, Keith and Kim Shelby Foust of Savannah, Tennessee; his brother, Kasey Foust of Savannah, Tennessee; and his half-sister, Jana Brent of Alpharetta, Georgia Kai was preceded in death by his grandparents, Guy and Helen Shelby, and Mancle and Katie Foust.

Kai Alexander Foust was born in Jackson, Tennessee on October 31, 1983, welcomed by his parents Keith and Kim Shelby Foust. He was raised in the Cerro Gordo community of Hardin County, Tennessee. Kai attended Hardin County Schools and was home... View Obituary & Service Information

The family of Kai Alexander Foust created this Life Tributes page to make it easy to share your memories.

Kai Alexander Foust was born in Jackson, Tennessee on October...

Send flowers to the Foust family.