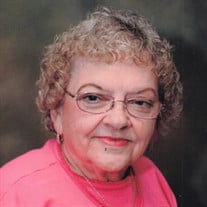 Katheryn Genevia Littlejohn Adkins was born April 17, 1939 in Alcorn County, MS the daughter of the late Katie Ilene Littlejohn Parmely. She was raised by her mother and step-father, Issac Parmely. She was united in marriage to Ewing H. (Skeet) Adkins on January 1, 1989. Mr. Adkins preceded her in death on July 20, 2009, following 20 years of marriage. Katheryn was formerly employed as a production worker for Mitchell Manufacturing in Corinth, Levi-Strauss in Ramer and Aqua Glass in Adamsville. She also worked for her son Ken as a waitress when he operated the Botel Restaurant in Counce. Tending her flower and vegetable gardens, canning, working in her yard, cooking and sewing were some of her favorite pastimes. In her younger days she was a Cub Scout mom, a football mom, a baseball mom, and a band mom for her son Ken-she loved it all! She also loved her animals-her little dogs and cats past and present. When she was able Katheryn attended the church of Christ. Katheryn departed this life on March 19, 2021 in Ripley, Mississippi at the age of 81 Years, 11 Months, 2 Days. She is survived by a daughter, Cherry Patrick and fiance Ricky G. James, Sr. of Guys, TN; four grandchildren: Jeremy Rebstock and wife Marilyn of Selmer, TN, Josh Rebstock of Ramer, TN, Emily Street and husband Cliff of Ripley, MS, and Walker Lipford of Michie, TN; six great-grandchildren: Patrick Rebstock, Spencer Rebstock, Drake Rebstock, Aden Rebstock, Iris Rebstock, and Sarah Street; three sisters: Carolyn Hensley and husband Russell of Ramer, TN, Betty Saxton and husband Thomas of Bethel Springs, TN, and Mary Thacker of Bethel Springs, TN; four brothers: Bennie Parmely of Selmer, TN, Bill Parmely of Ramer, TN, James Parmely and wife Beverly of Selmer, TN, and David Parmely and wife Bonnie of Selmer, TN; and many nieces, nephews, extended family and friends. In addition to her husband and parents, Katheryn was preceded in death by a a son, James Kenneth Freeman, and a brother-in-law, David Thacker.

Katheryn Genevia Littlejohn Adkins was born April 17, 1939 in Alcorn County, MS the daughter of the late Katie Ilene Littlejohn Parmely. She was raised by her mother and step-father, Issac Parmely. She was united in marriage to Ewing H.... View Obituary & Service Information

The family of Katheryn Littlejohn Adkins of Selmer, TN created this Life Tributes page to make it easy to share your memories.

Send flowers to the Adkins family.