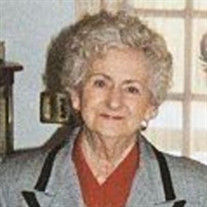 KATHLEEN BREWER HEARN WEAVER MULLINS Henderson, TN: Virginia Kathleen Brewer Mullins age 96, passed away February 5, 2022 at her home. She was born October 7, 1925 in Henderson County, the daughter of the late Henry Coleman and Anna Era Ryals Brewer, as a teenager she moved to the Glendale community of Chester County. She attended school at Chester County. In 1947 she married William O. Hearn of the Deanburg Community, he passed in 1967. She married Delbert Weaver in 1972 and he passed in 1998. Then she married Tom Mullins in 2002 of the Sweetlips community who preceded her in death in 2010. She was a member of the Sanford Hill Baptist Church. She worked at Salant & Salant for more than twenty years. She was on a bowling league and had a high score of 233. She loved to cook, especially bake cakes. She was a member of the Jacks Creek Community Center and a Charter Member of the Hickory Corner Community Center. Mrs. Mullins is survived by four sons, Gary Hearn of Killen, AL, Roger Hearn of Jackson, Nelson Weaver of Henderson and Jerry Weaver of Henderson; two daughters, Judy Pequignot of Henderson, and Debbie Price of Sunriver, OR, a step-daughter Jackie Huckaby of Cordova, twenty one grandchildren and thirty great grandchildren, and 4 great-great grandchildren. She was preceded in death by her parents, husbands, a brother, Albert Hermon Brewer, a sister, Jo McClory and a step-daughter Patsy Stock. Funeral services will be 11 am Saturday, February 12th at Shackelford Funeral Directors – Crook Avenue Chapel with Shane Connor officiating. Burial will follow in Unity Cemetery at Jacks Creek. The family will receive friends at Crook Avenue from 5:00 PM until 8:00 PM Friday evening February 11th. Shackelford Funeral Directors of Henderson 731-989-2421

The family of Kathleen Brewer Hearn Weaver Mullins of Henderson created this Life Tributes page to make it easy to share your memories.