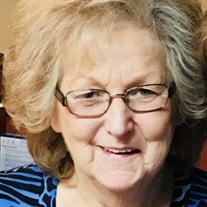 Nola Kay Young was born January 28, 1949 in Adamsville, TN, the daughter of the late James Willie Smith and Lena Lain Smith. Kay was united in marriage to Raymond Earl Young on December 31, 1964. She was a member of the Landmark Pentecostal... View Obituary & Service Information

The family of Kay Young of Stantonville, TN created this Life Tributes page to make it easy to share your memories.