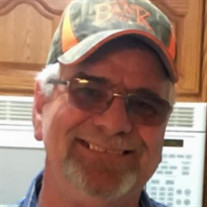 Ken Burnette, 58, of Middleton, passed from this life Monday, July 5 at West Tennessee Healthcare Rehabilitation in Jackson. He was born Friday, April 26, 1963, in Bolivar, to Robert Stanton Burnette and Margie Bell Porter Burnette and lived most of his life in Saulsbury. He attended Grand Junction Elementary School and Middleton High School. He married Sandy Jenkins on July 26, 1985 and together they enjoyed life, raising their children and laughing together. He worked almost 40 years at Glasteel, where he was a foreman and #1 on the seniority list. Mr. Burnette enjoyed hunting and fishing and sitting on his back porch, watching the hummingbirds. His family describes him as a craftsman, able to fix anything, and was 'everybody's favorite uncle'. He was known to give nicknames to everyone he met, especially his family. He loved being around his family the most, and never gave a second thought to getting out and playing with his grandkids. Mr. Burnette attended Pocahontas First Baptist Church. Survivors include his wife, Sandy Burnette of Middleton; his mother, Margie Burnette of Saulsbury; two daughters, Katie Beibers (John) of Pontotoc, MS and Sarah Parker (Logan) of Saulsbury; a sister, Lisa Hunsucker of Middleton; four brothers, Neal, Glen, Mark and Paul Burnette, all of Saulsbury; a sister in law, Sharon Jenkins Bishop of Collierville; and five grandchildren who lit up his world, Lexi, Will, James Henry, Tyler and Brandon. He was preceded in death by his father; a son, Thomas Burnette in 2005; and two brothers, Ronnie and Larry Burnette. Memorial contributions in his name may be sent to St. Jude Children's Research Hospital (www.stjude.org/donate).

The family of Ken Burnette created this Life Tributes page to make it easy to share your memories.

Ken Burnette, 58, of Middleton, passed from this life Monday,...

Send flowers to the Burnette family.