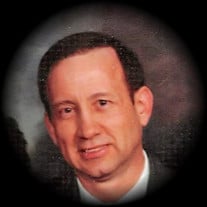 Kendell S. Shepherd, 81, of Middleton, passed from this life Tuesday, May 3, 2022, at Sanctuary Hospice House in Tupelo, MS. The husband of Donna G. Shepherd, whom he married on November 4, 1963, in Nashville, he worked as a financial advisor, retiring 9 years ago from Waddell and Reed and worked for General Mills for 10 years prior to that. He was born Wednesday, April 23, 1941, in Dalton, Georgia, son of the late Clifford Eugene Shepherd and Mildred Rose Stevens Shepherd. He attended the University of Georgia and was a member of the ROTC. He then went to David Lipscomb University and received his Bachelor of Science degree. In high school, he excelled in all sports and was named "Mr. West Side" upon graduation in Rocky Face, GA. He also was at the top of his class in micro-computer from State Tech and enjoyed playing sports, especially tennis. He always loved to travel and had been to every state except Alaska. Mr. Shepherd enjoyed public speaking and was a member of the Toast Masters Organization. For many years my favorite activity was playing tennis. He and his wife moved to this area from Memphis around 12 years ago. He was a former deacon with White Station church of Christ and currently was a member of Middleton church of Christ. Survivors include his wife, Donna G. Shepherd of Middleton; two daughters, Cynthia Renee Cox (William) of Watauga, TX and Janet Diane Durham (William) of Middleton; a sister, Melinda Gentry of Dalton, GA; two brothers, Ray Shepherd (Hazel) of Dalton, GA and David Shepherd of Charleston, SC; two grandchildren, William R. Durham, III and Collin Austin Cox; and several nieces and nephews. In addition to his parents, he was preceded in death by a sister, May Leadford. Memorial contributions in his name may be sent to the American Liver Foundation (www.liverfoundation.org).

Kendell S. Shepherd, 81, of Middleton, passed from this life Tuesday, May 3, 2022, at Sanctuary Hospice House in Tupelo, MS. The husband of Donna G. Shepherd, whom he married on November 4, 1963, in Nashville, he worked as a financial advisor,... View Obituary & Service Information

The family of Kendell S. Shepherd created this Life Tributes page to make it easy to share your memories.

Kendell S. Shepherd, 81, of Middleton, passed from this life...

Send flowers to the Shepherd family.