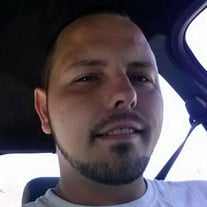 Kerry Edward "Boo-Boo" Burns, Jr., 34, of Whiteville, passed from this life Sunday, February 28, 2021. He was born Monday, October 6, 1986 in Jackson, the son of Vickie Lynn Watson of Somerville and Kerry Edward Burns, Sr., of Somerville and lived in Somerville most of his life. He worked as a carpenter with Hogan Construction and had been with Water Well Solutions in Somerville for 2-3 years. He was a 2005 graduate of Haywood High School and enjoyed video games with his nephews, and playing with his niece and spending time with his sister. He loved music and was affectionately referred to as a 'Momma's Boy', which he gladly accepted and relished in. In addition to his parents, survivors include a sister, Ashley Burns and her fiance', Douglas Hogan of Whiteville; four nephews, Brandon King, Jr., Ayden Cannon, Alex Shea Burns and Mason Thomas; a niece, Madison Thomas; four half brothers, Collin Burns and his fiance', Tammy Houston, of Somerville, Jeremiah Wade, Joseph Wade and Matthew Wade, all of Arkansas; 15 cousins, 5 aunts and 7 uncles. He was preceded in death by a half brother, Stephen Shea Burns. Memorial contributions in his name may be sent to St. Jude Children's Research Hospital (www.stjude.org/donate). He was preceded in death by maternal grandparents, Alfred O'Neil and Pauline Watson; and his paternal grandparents, Joe and Helen Burns. While visiting or attending services, please consider the following guidelines: * Maintain 6 feet between yourself and the next closest person; * Refrain from hugs and handshakes; * When you sneeze or cough, use your elbow to cover your nose and mouth; * Wash your hands often; * Avoid touching your face; and * Minimize time spent in places where people gather.

Kerry Edward "Boo-Boo" Burns, Jr., 34, of Whiteville, passed from this life Sunday, February 28, 2021. He was born Monday, October 6, 1986 in Jackson, the son of Vickie Lynn Watson of Somerville and Kerry Edward Burns, Sr., of Somerville and... View Obituary & Service Information

The family of Kerry Edward "Boo-Boo" Burns Jr. created this Life Tributes page to make it easy to share your memories.

Send flowers to the Burns family.