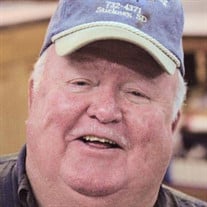 Larry F. Blackstock Henderson, TN: Larry Faye Blackstock, age 79, passed away in his home in Enville Monday morning. He was born and raised near Hinkle in Hardin County, the son of the late Lorene Blackstock Johnson, and was raised from an early age by his aunt Jean Blackstock. He graduated high school at Saltillo in 1960 and entered the Navy the same year. He served on the Hannock CVA19 as a dental tech serving in Japan and the Philippines. He married Linda Woods in 1966 and they made their home in Enville where he farmed. He also worked for CRC in the pipeline business having worked in all 50 states and 15 foreign countries. He worked for Moorman’s Feed Company and then Combined Insurance and later Woodmen of the World for 30 years. He had served as a Chester County commissioner since 1986, to the present. He loved his children, grandchildren, and great grandchildren. He loved to talk with people and never met a stranger. He is survived by his aunt, Jean Blackstock of Sardis; a son, Steve Blackstock (Kris) of Henderson; daughter, Stephanie Rushing (Jonathan) of Reagan; two brothers, Jerry Johnson of Ramer and Danny Johnson of Florida; a sister, Sharon Johnson; six grandchildren, Dr. Drew Blackstock (Kayla), Kyle Patterson (Kayla), Brandi Hill (Andrew), Bethany Seagraves (Tyler), Cody Rushing (Cheyenne), and Erin Rushing; and eight great grandchildren, Ola Jean, Georga Rose, and Sylvia Renee Blackstock, Faithlynn Gayle and Sutton Strong Patterson, Shep Northrope Hill, and Braxton Lee and Ty Hunt Seagraves. He was preceded in death by his parents; wife, Linda Woods Blackstock in June 2018 and two sisters, Kattie Johnson and Pam Johnson. Funeral services will be 2:00 PM Thursday, July 29th at Shackelford Funeral Directors – Crook Avenue with Dr. Drew Blackstock and Ricky Tedford officiating. Burial will follow at the Milledgeville Cemetery. The family will receive friends at Crook Avenue 6:00 PM to 9:00 PM Wednesday. Shackelford Funeral Directors of Henderson 731-989-2421

Larry F. Blackstock Henderson, TN: Larry Faye Blackstock, age 79, passed away in his home in Enville Monday morning. He was born and raised near Hinkle in Hardin County, the son of the late Lorene Blackstock Johnson, and was raised from... View Obituary & Service Information

The family of Larry F. Blackstock of Enville created this Life Tributes page to make it easy to share your memories.

Send flowers to the Blackstock family.