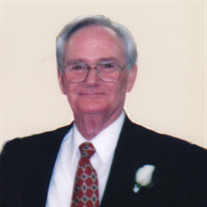 LAVERN BAILEY Henderson, TN: Braden Lavern Bailey age 93 passed away March 9, 2022 at his home. He was born November 5, 1928 in Henderson County, the son of the late Clark Braden and Violet Ider Ridley Bailey. He married his lifelong sweetheart Shirley Ann Bromberek on September 24, 1957. They made their home in Jacks Creek, TN. He joined the TN Army National Guard, then the US Army during the Korean War. He farmed and then he and his brother, Howard Bailey established Bailey Brothers Trucking Company which they ran for about ten years. He then began operating Bailey’s Store in Jacks Creek for twenty-five years. He enjoyed farming, gardening and especially spending time with his children and grandchildren. He was a member of the Community of Christ Church in Jacks Creek and served as its minister for a time. Mr. Bailey is survived by his wife, Shirley Ann Bromberek Bailey of Henderson; four daughters, Joan Chamberlain (Dan) of Loudon, TN, Nancy Davidson of Henderson, Lisa Robino (David) of Medford, OR and Jill Davis (Doug) of Oxford, MS; six grandchildren, Ashley Brown (Hunter), Braden Davidson, Joseph Robino, Jacob Robino, Emily Wells and Katherine Cabrera; four great grandchildren, Andrew Brown, Bailey Brown, Marcus Wells and Samuel Wells; and a sister, JoAnn Jones of Jacks Creek. He was preceded in death by his parents, a brother, Howard Bailey, two sisters, Earlene Jones and Kathy Mays and a son-in-law, Mark Davidson. Committal services will be 2:30 PM Friday, March 11th at Bailey Cemetery The family will receive friends 11:00 AM until 2:00 PM on Friday at Shackelford Funeral Directors – East Main Chapel. A Memorial service will be held at a later date. In lieu of flowers memorials may be sent to the Gary Sinise Foundation or Tunnel to Towers. Shackelford Funeral Directors of Henderson 731-989-2624

The family of Lavern Bailey of Henderson, TN created this Life Tributes page to make it easy to share your memories.

Send flowers to the Bailey family.