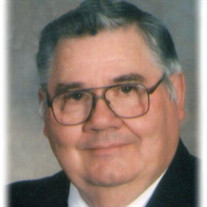 Lawrence Ray Steiner was born January 22, 1932, in Clarksville, TN the son of the late Euing Ray Steiner and Goldie Rutlidge. Mr. Steiner was united in marriage to Imogene Thomas Steiner December 31, 1954, and remained happily married until her passing on March 4, 2014. He was a minister of the Baptist faith, a member of the Masonic Lodge and worked as a Foster Grandparent in the Wayne County Elementary School. He proudly served his country in the United States Army for four years and was interested in aviation as he was a student pilot. He is survived by his son, Thomas Ray Steiner of Waynesboro, TN; daughter- in- law Mitzi Steiner of Franklin, TN; brother, Clarence Steiner of Sevierville, TN; two sisters, Evelyn Riggins of Clarksville, TN, Beavla May Austin of McKenzie, TN; In addition to his wife and parents, Mr. Steiner was preceded in death by a son, Charles Jonathan Steiner; daughter, Shirley Ann Steiner; daughter-in-law Wanda Fay Steiner and brother, Howard Steiner; Services will be held on March 26, 2022 at 1:00 PM at Shackelford Funeral Directors at Waynesboro in Waynesboro, Tennessee, with Mark Riggins officiating. Burial will follow in the Memorial Gardens at Waynesboro, Tennessee Visitation will be held Saturday March 26, 2022 from 12:00 noon until service time at the Shackelford Funeral Directors in Waynesboro, TN.

The family of Lawrence Ray Steiner created this Life Tributes page to make it easy to share your memories.

Send flowers to the Steiner family.