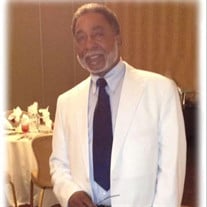 On April 21, 1947, Lee Roosevelt Damron was born the second of nine children to the late Lewis “Buck” Roosevelt Damron and Mary Frances Ray Damron. At the age of 74, Wednesday, August 4, 2021, he transitioned from his earthly home in Counce, Tennessee, to go home to live with the Lord for to be absent from the body is to be presence with the Lord. Lee attended public school in McNairy and Hardin Counties. He graduated from Dunbar High School in Savannah, Tennessee and attended Tennessee State University, Nashville, Tennessee, for two years. He returned home and was employed by PCA for 45 years. While working at PCA, he also started Damron Trucking Company and served as Owner and President until his death. On September 2, 1967, he was united in marriage to Cora Jean Sevier. They have a daughter, Gwen Damron Tall. He loved family and took pride in organizing family reunions and hosted The Damron Family annual gatherings. Lee liked attending car shows. He won numerous trophies and awards for his prize 1970 Ford Torino. He was featured in MOTAA magazine with his Torino for being one of five owners of the car manufactured with air conditioning in 1970. Lee had a passion for working with his trucks and loved anything to do with trucks. He was very outgoing and always had a smile on his face. There is no doubt that Lee touched a lot of lives and will be greatly missed. Lee was a member of Saulter’s Chapel CME Church, Acton, Tennessee, where he served as Steward and Head Trustee. He was a giving person and his love to service extended to the neighbors and community. Lee leaves to cherish his memories, his devoted wife of 54 years, Cora Jean of Counce, Tennessee; one daughter, Gwen (Nevada) Tall of Murfreesboro, Tennessee; four sisters, Patricia (Harold) Malone, Martha (Paul) Honeywood, Denice (Greg) Guy and Felicia Damron all of the suburbs of Atlanta, Georgia; one brother, Donnie (Mary) Damron of Counce, Tennessee; two sisters-in-law, Queen Sevier and Darcell Sevier of Savannah, Tennessee; a brother-in-law Terry Stackens of Purdy, Tennessee; a host of nieces, nephews, aunts, uncles; a special cousin, Nathan Irons; a special friend, Royce Cawthon; a multitude of friends and loved ones. He was preceded in death by his father, Lewis “Buck” Roosevelt Damron; mother, Mary Frances Ray Damron; One brother, Melvin Damron and two sisters, Ida Damron and Charlotte Damron Stackens.

On April 21, 1947, Lee Roosevelt Damron was born the second of nine children to the late Lewis &#8220;Buck&#8221; Roosevelt Damron and Mary Frances Ray Damron. At the age of 74, Wednesday, August 4, 2021, he transitioned from his earthly home... View Obituary & Service Information

The family of Lee R. Damron created this Life Tributes page to make it easy to share your memories.

Send flowers to the Damron family.