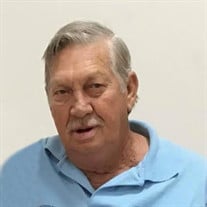 Leon McCormick was born September 3, 1944 in Shiloh, TN the son of the late Lyman Lee and Edna Omega Keen McCormick. He was united in marriage to Wanda Noel Smith on December 18, 2016. Leon was a 1963 graduate of Adamsville High School. He attended the Tennessee College of Applied Technology in Crump to learn welding, and was a jack of all trades; he was not afraid to tackle any project. Leon was employed by Aqua Glass in Adamsville for over 20 years as a truck driver. He also operated the Wagon Wheel Restaurant for 17 years and the Biggest Little Diner for 5+ years, both in Adamsville. Leon served as a coach in a women's softball league and won many championships. He was a gun and outdoor enthusiast, enjoyed riding motorcycles, and loved all animals. Leon was a member of the Selmer Moose Lodge and a Baptist in belief. Leon departed this life on February 17, 2022 in Jackson, Tennessee at the age of 77 Years, 5 Months, 14 Days. He is survived by his wife of 5 years, Wanda Smith McCormick of Finger, TN; two sons, James Kevin McCormick of Adamsville, TN and Chris Martin of Huntsville, AL; three grandchildren: Keisha McCormick of Corinth, MS, Kelle Edenfield of Selmer, TN, and River Moore of Stantonville, TN; three great-grandchildren: Aslyn Edenfield, McKenna Wadkins, and Hazely Edenfield; a step-son, Brent Miller (Heaven) of Bethel Springs, TN; two step-daughters, Shawn Edwards and Melony Hostetler (Yost), all of Finger, TN; three step-grandchildren: Zach Edwards, Justin Edwards, and Kara Dawson (Hunter); 2 step-great-granddaughters; four sisters: Linda Scott (Jerry), Ava Nixon (Virgil), Shelia Smith (Mike), and Patricia Dickerson, all of Adamsville, TN; three brothers: Larry McCormick of Adamsville, TN, Jerald McCormick (Donna) of Houston, TX, and Mike McCormick of Adamsville, TN; and a host of nieces, nephews, extended family and friends. In addition to his parents, Leon was preceded in death by a previous wife, Margie McCormick, on July 30, 1999, and a sister, Betty Hughes.

Leon McCormick was born September 3, 1944 in Shiloh, TN the son of the late Lyman Lee and Edna Omega Keen McCormick. He was united in marriage to Wanda Noel Smith on December 18, 2016. Leon was a 1963 graduate of Adamsville High School. He... View Obituary & Service Information

The family of Leon McCormick of Finger, TN created this Life Tributes page to make it easy to share your memories.

Send flowers to the McCormick family.