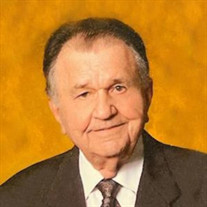 Lewis Edward Jernigan of Selmer, TN was born March 2, 1927, in Bethel Springs, TN. He was the son of the late Homer Gordon and Maggie Lois Kernoldle Jernigan. He was untied in marriage to Mary Jewell Mitchell on May 12, 1945. Lewis began his career working in the Kroger store in Selmer, TN in 1946. He proceeded to work and manage several grocery stores in west Tennessee before opening his own grocery store in Selmer called Lewis’ Food Store in 1960. In 1972 he expanded and rebranded the store as the Piggly Wiggly Grocery in Selmer, TN. Lewis loved his grocery store and all of his customers. Many wonderful people in town worked for him over the years. He loved people and never met a stranger. He loved to tell people stories about his life and the grocery store. After more than 50 years in the grocery business, he retired and sold his business. Lewis was a Christian and a faithful member of Selmer First Baptist Church where he served as a Deacon, a Sunday School Teacher and various other roles in the church. He loved everyone in the church and in his later years he looked forward to shaking everyone’s hand on Sunday morning. Because of his love of Jesus and the community he joined the Gideons. He enjoyed visiting many local churches as a speaker. Lewis was inspired to play golf by his son Lewis, Jr. and loved to play with his wife and many friends. Over the years he hosted several Golf Tournaments in town. He took his golf game very seriously and played strictly by the rules until the age of 89. Lewis loved the Lord, his family, his church and the community and never forgot the friends that helped and supported him throughout his life. Mr. Jernigan departed this life on September 3, 2021 in Selmer, Tennessee at the age of 94 Years, 6 Months, 1 Day. He is survived by his daughter, Mary Lindolyn Evans of Memphis, TN; two grandchildren, Robert Bryan Evans and wife Angela of Germantown and Leigh Lindolyn Evans of Memphis, TN; and four great-grandchildren: Kayla, Grace, Collin and Grant. In addition to his parents, he was preceded in death by his wife of 68 years, Mary Jewell; a son Lewis Edward Jernigan, Jr.; a daughter Marsha Jean Hutcherson; and a brother Eugene Jernigan.

Lewis Edward Jernigan of Selmer, TN was born March 2, 1927, in Bethel Springs, TN. He was the son of the late Homer Gordon and Maggie Lois Kernoldle Jernigan. He was untied in marriage to Mary Jewell Mitchell on May 12, 1945. Lewis began his... View Obituary & Service Information

The family of Lewis Edward Jernigan of Selmer, TN formerly of Bethel Springs, TN created this Life Tributes page to make it easy to share your memories.

Send flowers to the Jernigan family.