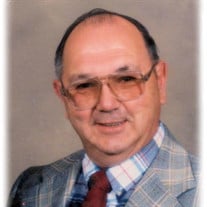 Lewis McQuaid departed this life on Monday, May 9, 2022, at the age of 87 years, 3 months, and 2 days. He was born in DuQuion, Illinois, on February 7, 1935, the son of the late Howard and Genieva Cowan McQuaid. On June 8, 1957, he was united in marriage to Anita Walker, who preceded him in death on February 13, 2010. Lewis served his country honorably for six years in the Army and three years in the Air Force. He retired from Commercial Laundry Consulting. Lewis was a family man, and loved his grandchildren and great grandchildren. He was a friend and a mentor to all those around him. Lewis is survived by his son, Alan McQuaid of Savannah, Tennessee; grandchildren, Michael McQuaid of Savannah, Tennessee, Lyle McQuaid of East, Tennessee, Daniel McQuaid of Michigan, and Justin McQuaid of Pickwick, Tennessee; eight great grandchildren; two great-great grandchildren; brothers, Jim McQuaid of Illinois, Vernon McQuaid of Florida, and Charles "Chuck" McQuaid of Clarksville, Tennessee; and sisters, Brenda Sanders of Missouri and Georgiann Stearns of Missouri. In addition to his parents and wife, Lewis was preceded in death by a brother, Calvin McQuaid.

The family of Lewis McQuaid created this Life Tributes page to make it easy to share your memories.

Send flowers to the McQuaid family.