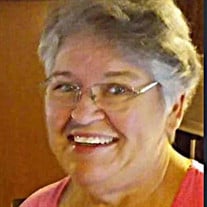 Linda Sue Lawler, age 66, of Bolivar, passed from this life on Sunday evening, September 27, 2020, at Bolivar General Hospital. The daughter of Will Frank Kennedy and Garnetta Mae McClung Kennedy, she was born August 10, 1954, in Lincoln, Nebraska. At the time of her death, she was still working for Southwest Area on Aging. She also worked as a caretaker, with Meals on Wheels and with Brints Nursing Home for 25 years. Well known as a loving person with a big heart, she enjoyed sewing, singing, and cooking, particularly for her family, but especially loved her grandchildren. Her family states that she 'kept her faith in God, no matter what'. Mrs. Lawler was a member of Piney Grove Baptist Church. Survivors include a sister, Cathy Stack of Jackson; a daughter, Jeanie Carol Foster of Jackson; grandchildren, Elizabeth Danielle Foster (Stephen Nugent), Courtney Carol Robertson (Mitchell) and Brianna Dawn Foster (Logan Korn); great grandchildren, Jasmine, Dakota, Khloe, Landon, Mason and Harleigh; nephews, Daniel Stack (Jin) and Dustin Kennedy (Thersa). The family wants to mention special people in Linda's and their lives who include, Deanna Woods, Ashley Burke, Mallory Vandiver, Tomeco Scott and Peggy Rivers. A special thank you to her great granddaughter, Khloe Sappington, whom her family considers 'a hero' for being with Linda. In addition to her parents, she was preceded in death by a brother, Rodney Carl "Dusty" Kennedy in 2012, a son, Bobby Lynn Foster in 2010, a daughter, Kimberly Foster Hale in 1995, a brother, Ronald "Face" Kennedy in 1995 and a grandson, David Lee Hale in 1992. Memorial contributions in her name may be sent to the American Heart Association (www.heart.org/donate) or St. Jude Children's Research Hospital (www.stjude.org/donate). While visiting or attending services for Mrs. Lawler, please consider the following guidelines: * Maintain 6 feet between yourself and the next closest person; * Refrain from hugs and handshakes; * When you sneeze or cough, use your elbow to cover your nose and mouth; * Wash your hands often; * Avoid touching your face; and * Minimize time spent in places where people gather. Thank you for your consideration.

Linda Sue Lawler, age 66, of Bolivar, passed from this life on Sunday evening, September 27, 2020, at Bolivar General Hospital. The daughter of Will Frank Kennedy and Garnetta Mae McClung Kennedy, she was born August 10, 1954, in Lincoln, Nebraska.... View Obituary & Service Information

The family of Linda Sue Lawler created this Life Tributes page to make it easy to share your memories.

Linda Sue Lawler, age 66, of Bolivar, passed from this life on...

Send flowers to the Lawler family.