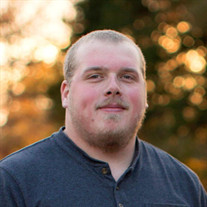 LOGAN THOMAS CLAYTON Henderson, TN: Logan Thomas "Mulehead" Clayton age 24 passed away December 24, 2020 at his business L.T.C. Construction. He was born March 30, 1996 in Jackson, TN, the son of Denny and Maria Holmes Clayton. He grew up in Henderson, TN. He was a 2014 graduate of Chester County High School. He was a member of the F.F.A. all four years and served as an officer. He was also a member of the Skeet Shooting team. He then attended Tennessee College of Applied Technologies and received his welding degree. Logan was awarded state recognition for welding while in school. He was a member of the First Baptist Church in Henderson. Logan enjoyed hunting and fishing and all outdoor activities. His job took him all over the country welding. He made friends everywhere he went. He was always the life of the party. Logan loved his friends with all he had. He especially loved his family and was proud of his parents. He loved to aggravate his big sister Dara and was so proud of his little brother Ben. When he became uncle to Brynli and Owen he had a new sparkle twinkling in his eye. Logan loved his fur babies Ace and Hazel. Logan is survived by his parents, Denny and Maria Holmes Clayton; sister, Dara Young (Will), brother, Benjamin Clayton all of Henderson; niece, Brynli Young; nephew, Owen Young; grandfather, Dennis Clayton, uncle, Donnie Holmes (Linda); aunts, Vera Reed (Steven), Debbie Comer (Dwight), Angie Clayton; cousins, Brandon Holmes, Haley Holmes, Abby Wolter, Andrew Wolter and Erin King and a special friend, Danielle Harben and boys Ryker and Reagan. He was preceded in death by; grandparents, Donald Earl and Delilah Holmes and Erma Dean Clayton. Funeral services will be 3:00 PM, Sunday, January 3, at Shackelford Funeral Directors – Crook Ave. Chapel with Bro. Maurice Hays and Seth Clayton officiating. Burial will be in Chester County Memory Gardens at a later date. The family will receive friends at Crook Ave. from 12:00 PM to 3:00 PM on Sunday. **Visitors are requested to wear nose and mouth covering and observe social distancing guidelines when attending the visitation or service.** Shackelford Funeral Directors of Henderson 731-989-2421

The family of Logan Thomas Clayton - Henderson created this Life Tributes page to make it easy to share your memories.

Send flowers to the Clayton family.