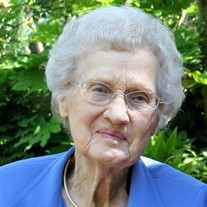 Lola Ree Gardner was born July 14, 1923 in McNairy County, TN the daughter of the late James Calvin and Edith Mae Jones Gardner. Ms. Gardner grew up on the family farm in rural McNairy County, Tennessee; hard work was a way of life she quickly learned. She could hoe a row and pick a sack of cotton alongside anyone. Ms. Gardner worked 43 years as a machine operator for Brown Shoe Company in Selmer. After retiring, she worked for Wal-Mart and volunteered at McNairy County General Hospital in the gift shop. Ms. Gardner was a member of Pleasant Site Baptist Church, serving as church secretary and on the cemetery association committee. She was extremely proud of her son and grandson, who both became medical doctors. Ms. Gardner departed this life on November 4, 2021 in Corinth, Mississippi at the age of 98 Years, 3 Months, 21 Days. She is survived by a son, Dr. Harvey Gardner and wife Paula of Memphis, TN; four grandchildren: Dr. Jay Gardner and wife Dr. Tonia Gardner of Memphis, TN, Jason Chambers and wife Amy of Marietta, GA, Neal Chambers and wife Jeanette of Roseville, CA, and Scott Chambers and wife Wendy of Bartlett, TN; 10 great-grandchildren; and several nieces and nephews, of whom she was especially fond. In addition to her parents, Ms. Gardner was preceded in death by three sisters: Oma Dee Ray, Ora Mae Littlejohn, and Ottie Tanner; and a brother, James Orville Gardner. Memorials may be made to a charity of the donor's choice.

The family of Lola Ree Gardner of Selmer, TN created this Life Tributes page to make it easy to share your memories.

Send flowers to the Gardner family.